Health service faces range of industrial actions in weeks ahead 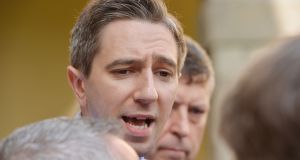 Minister for Health Simon Harris: said a sustained overtime ban would have an adverse impact on services for patients. Photograph: Alan Betson

The overtime ban by psychiatric nurses is already having an impact on patients with the curtailment of some community mental health services.

However the health service could face industrial problems on other fronts in the weeks ahead.

The overtime ban by members of the Psychiatric Nurses’ Association (PNA) is essentially a continuation of the campaign of industrial action over pay and staffing issues that commenced last January and was suspended to facilitate talks at the Workplace Relations Commission.

Members of the Irish Nurses’ and Midwives’ Organisation (INMO) as well as the PNA had sought increases in pay – to bring them into line with graduate-entry grades such as therapists. They argued these rises were needed to address serious recruitment and retention problems.

Following a three-day strike the INMO backed a Labour Court-brokered €39 million deal which involved the introduction of a new enhanced nurse/midwife contract and the extension of some allowances.

While the PNA entered talks at the Workplace Relations Commission, it maintained that no meaningful progress was made.

Some sources said the union wanted existing pay differentials between psychiatric nurses and general nurses and midwives to be maintained and had been seeking clarification on this from management.

It is understood the PNA also wanted clarification on terms of reference for promotional posts and for existing allowances to be extended to additional nurses.

The union was also deeply unhappy with recruitment restrictions put in place in parts of the Health Service Executive in an attempt to rein in a financial deficit that had reached €116 million by April.

The PNA maintained there were already 700 vacancies in mental health services across the country and the restrictions meant that some staff nurses had been told jobs that had been offered were no longer available.

Mental health services are very reliant on both overtime and personnel provided through agencies. If the current action by psychiatric nurses continues, the pressure on the HSE and the Government will intensify.

Minister for Health Simon Harris said on Thursday that a sustained overtime ban would have an adverse impact on services for patients.

The Minister urged the PNA to go back to the State’s industrial relations machinery . He pointed to how the Labour Court had brokered a deal in the dispute involving the INMO which had appeared extremely difficult at the time.

However while INMO members backed the deal on a new enhanced contract in a ballot several months ago, the agreement has not yet been implemented on the ground.

In an answer to a parliamentary question tabled by Stephen Donnelly of Fianna Fáil on Wednesday, the Minister said a detailed implementation plan to give effect to this agreement was currently being finalised by the HSE.

“It will set out the actions to be taken by the HSE to implement the enhanced nurse/midwife contract. It will also set out key productivity measures that will be subject to independent verification.”

The Government has also faced strike action in recent weeks by about 10,000 health service support staff over pay and this dispute has not yet been resolved. A Labour Court process ended on Wednesday night without a recommendation being issued. The trade union Siptu warned members to be prepared for more strikes in the week after next.