Death of one of Ireland’s last WWII veterans announced 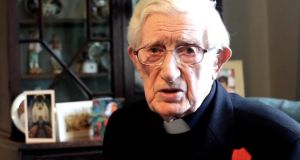 Canon Robert Marsden, one of the last Irish survivors of the second World War, has died aged 95.

He was awarded France’s highest honour, the Chevalier of the Legion d’Honneur, in January 2016 for his wartime contribution to the liberation of that country.

Tribute was paid to him by French Ambassador Stéphane Crouzat at an event in Dublin’s Glasnevin cemetery onWednesday.

Born in Dublin in 1924, Canon Marsden trained with the Royal Inniskilling Fusiliers and went on active service in Normandy in 1944.

He landed at Mulberry Harbour as part of the 1st battalion, Hampshire Regiment and joined the 50th Northumbrian Division with which he took part in the liberation of Brussels.

He was then sent on to Nijmegen in the Netherlands, on the road to the battle of Arnhem. Due to severe losses, the 50th Northumbrian Division, was then sent to reinforce the 7th Armoured Division, more famously known as the “Desert Rats”.

He finished the war near the Kiel Canal in the German state of Schleswig– Holstein.

On returning to Ireland, Canon Marsden was ordained Church of Ireland Deacon for St James’ Parish, Dublin, in 1950 and priest in 1951.

Following retirement in1994, he lived in Dublin’s Sandymount with his late wife Betty. He is survived by their children Joy, Gerald and David.

His funeral will be held at 11 am on Saturday in St Matthew’s Church, Irishtown, with cremation afterwards at Mount Jerome.