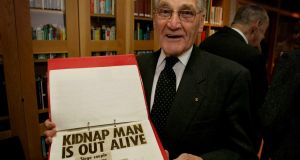 Dr Tiede Herrema at the Special Collections Library at the University of Limerick in October 2005, when he presented his papers to the library. File photograph: David Sleator

Tiede Herrema, the Dutch industrialist kidnapped by the IRA in 1975, has died aged 99.

Dr Herrema died after a long illness on Friday, the day after his wife of 72 years, Elisabeth, was buried. She was 94.

Dr Herrema’s kidnapping by the IRA on October 3rd, 1975, made international news. He was managing director of the Limerick factory Ferenka when he was abducted by Eddie Gallagher and Marion Coyle.

He was held hostage for 36 days. For the last 18 days of his ordeal, Dr Herrema and his kidnappers were trapped in the box room of a house in the St Evin’s Park estate in Monasterevin, Co Kildare, surrounded by gardaí and members of the media.

Dr Herrema recalled his ordeal in an interview with Kathy Sheridan in The Irish Times five years ago. He said the worst part was not knowing where he was, or even why he was being held.

“I had no sense of what they were fighting about. What did they want? They were nervous. As I was. As long as you don’t know where you are, and what they are going to do, you are frightened. Of course you are.”

The kidnappers sought the release of three IRA political prisoners. In Gallagher’s case it was Rose Dugdale, the mother of his child. Coyle wanted the release of her boyfriend Kevin Mallon, who was also serving time in jail. The pair also demanded the release of James Hyland.

The kidnappers later modified their demands to include an IR£2 million ransom and flights to the Middle East. The government refused to yield despite the kidnappers threatening to kill Dr Herrema.

Mrs Herrema became a prominent figure at the time when she spoke to RTÉ and said the ransom should not be paid.

The couple later objected to the 20 and 15 year sentences imposed on Gallagher and Coyle following the incident, saying they were too severe.

It had not been the first time Dr Herrema found himself incarcerated against his will. During the second World War, as a Dutch resistance fighter, he was arrested by the Nazis and sent to a concentration camp in Poland. After the prisoners were liberated by the Russians, Dr Herrema walked 500km to the safety of the American lines.

After the 1975 kidnapping, the Herremas returned to the Netherlands. In gratitude for their fortitude, they were made honorary Irish citizens, and later purchased an apartment in Dublin. Dr Herrema was made a freeman of Limerick city and he donated his papers to the University of Limerick.

President Michael D Higgins paid tribute to Dr Herrema who he said “harboured no bitterness towards his abductors and maintained a very strong bond with Ireland”.

“Both he and Elizabeth accepted honorary Irish citizenship. They will be missed, and fondly remembered by their many friends in Ireland.

“Sabina and I send our deepest condolences to their four sons, wider family and friends.”

Minister for Justice Charlie Flanagan, whose father Oliver was a TD and parliamentary secretary (junior minister) at the time, said the memory of the kidnapping is “indelibly imprinted on the memories of many people in this country”.

The kidnapping was a “direct attack on the State by terrorists”, the minister added.

“The terrifying spectacle of a businessman being kidnapped by terrorists was a truly shocking event at the time. I have vivid personal memories as Dr Herrema was held near my hometown of Mountmellick for a time by his captors.

“The then Taoiseach, the late Liam Cosgrave, bravely faced down that threat with the full support of the late Elisabeth Herrema.

“I believe we all have much to learn from the ordeal that Tiede Herrema endured and the great magnanimity and courage he and Elisabeth always embodied. Their passing, just a short time apart, is a loss to both The Netherlands, and Ireland.”

The Minister for Foreign Affairs Simon Coveney said the actions of the Herremas over the year “epitomise the true spirit of forgiveness and reconciliation which are needed to move beyond conflict and adversity.

“We are honoured that that the Herremas chose not to let such a terrible life-changing experience colour or define their relationship with Ireland.”

The Herremas long-time friend Joe Brennan, who was a young first secretary in the Irish Embassy in the Netherlands at the time of the kidnapping, described Dr Herrema as a “man of great principle, rigour and kindness.

“He was a man of the deepest courage and integrity. That served him well all through his long life and particularly through his ordeal . . . He was a great friend of Ireland.”

Dr Herrema’s funeral takes place in Arnhem, the Netherlands, on Wednesday. He is survived by his four sons, Jelle, Sjoerd, Idse and Harm, grandchildren and great-grandchildren.