‘Everyone’s at home every night, you’re going for walks. It’s a different way of life. They might say ‘I won’t bother with the pubs at all’ 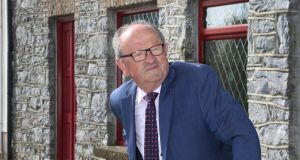 Padraic McGann beside his bar in Monivea, Co Galway. He says if pubs remain closed until the end of the year he does not believe his business will survive. Photograph: Joe O’Shaughnessy

Publican Padraic McGann (70) from Co Galway speculates ruefully on what would happen if his pub, which has been in his family for four generations, was to close as a result of Covid-19. “I’d say I’d be going to my grave fairly rapidly.”

McGann’s pub in Monivea, a small village six miles outside Athenry, was bought by Mr McGann’s great grandfather Peter in the 1850s, and in 1976 he took over the pub, following on from his grandfather and father.

The current president of the Vintners’ Federation of Ireland (VFI), which represents publicans outside of Dublin, McGann says if pubs remain closed until the end of the year or 2021 he does not believe his business will survive.

“No, we wouldn’t be able to [survive],” he says. “There’s no question about it...I’d say I’d be going to my grave fairly rapidly if that had to happen.

“When you’re here that long and knowing what my father had to do to survive and my grandfather, those days were really tough.

“You’d be saying to yourself, ‘oh God this is gone, and I had to let it go’. That would be difficult. I would hope that my own [children] would even open it at weekends if that has to be it when I’m gone.”

Situated 30km from Galway city, McGann says Monivea is “a completely farming community” which is boosted by local GAA and rugby clubs. Most Friday and Saturday nights, before coronavirus, he provided lifts home to between 20 and 30 customers.

“There’s no tourism. No tourists ever visit our village unless they take a wrong turn. People are more likely to go to Galway city.

“At one time you would have 21st parties, weddings, birthdays. All that stuff was fabulous for us, but things moved on and people are more likely to go to the city now.

“I had a nightclub and a function room at one time – they’re idle at the moment.”

McGann says the Government should provide a loan scheme for publicans when they are allowed to reopen to help with “cash flow problems”.

“That’s the biggest worry to every one of us at the moment – where will we get that first few bob to start us off and keep us going for a year?

“The other worry is that people are going to change their habits. Everyone’s at home every night, you’re going for walks, it’s a different way of life. They might say ‘I won’t bother with the pubs at all’.”

McGann says he also believes it is important that some sort of time line is established by the Government and health officials to allow publicans adequately plan for the coming months.

“Nothing has ever happened like this before, so it’s new territory. We just have to keep working with the Government and the health officials, and that’s what we’re doing.

“We just don’t know when we’re going to open. We’d love to be able to have a date or some idea of when we might be opened. I don’t how long more people can survive and keep going.”