Earlier this week a HSE report showed that County Cavan overtook Dublin as the county with the highest incidence of Covid-19. Video: Enda O'Dowd 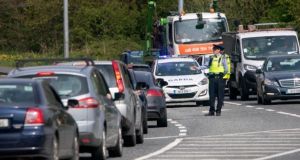 The incidence of the virus in the Republic generally falls the further south one travels. Photograph: Colin Keegan/Collins Dublin

County Cavan has the highest incidence of Covid-19 in the Republic, and the number of cases in other Border counties is rising fast, a new report shows.

Cavan overtook Dublin as the county with the highest incidence of the disease in recent days, the daily epidemiological reports from the Health Service Executive reveals.

The incidence of coronavirus in Co Monaghan is also rising fast, and now stands at 570.2, while neighbouring Co Louth has an incidence of 463.2.

The “Border effect” on case numbers is evident from an map from the HSE’s Health Protection Surveillance Centre showing seven of the eight counties with the highest incidence clustered in the north-east of the Republic. The exception is Mayo, with an incidence of 333.3, which does not share a border with Northern Ireland.

The incidence of the virus in the Republic generally falls the further south one travels, with Co Wexford have the lowest figure, at 104.2.

Numerically, Dublin accounts for half of all confirmed cases, at 9,224, followed by Cork, where 6 per cent of cases have been reported.

By Friday, 5,064 healthcare workers had been infected with the virus, with foreign travel a known factor in only 156 of these cases.

There were 208 clusters of the disease in nursing homes, and 114 in residential institutions, the HPSC reported, along with 83 in private houses and 80 in hospitals.

Of the 18,431 laboratory confirmed cases of Covid-19, 882 have died, giving a case fatality rate of 4.8 per cent. Of the patients who were hospitalised, 14 per cent were admitted to ICU.

Meanwhile, there were 51 patients waiting in emergency departments for admission to hospital this morning, according to the Irish Nurses and Midwives Organisation’s TrolleyWatch count.