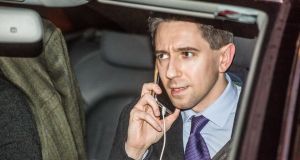 “Our core objective is to shift the majority of care from the acute to the community setting to bring care closer to home for service users,” Minister for Health Simon Harris said on Wednesday. Photograph: James Forde

The Government is to assess the existing contracts of health workers as part of a move to providing more care in the community and, possibly, extended working hours, according to a new plan for the Sláintecare health reforms.

The action plan says current contracts will be looked at “in the context of enabling a shift to significantly enhanced community-based care”.

Research on the potential impact of artificial intelligence and robotics etc on workforce planning, and on services for patients and service users, is also promised in the plan.

Nearly 80 additional beds are to be provided in hospitals before the end of the year, it says .

The additional beds will be provided at the Mater hospital in Dublin and Cork University Hospital as well as in Drogheda and Tipperary in the final three-quarters of the year.

It says 75 acute beds were provided as part of the initiative to deal with additional pressures in hospital this winter, while 202 additional beds will be fully operational by the first few months of 2020.

The Sláintecare action plan 2019, which was published on Wednesday by Minister for Health Simon Harris, sets out the reforms to be put in place this year.

In the year ahead, new organisational and operational structures for the future reconfigured health and social care service will be defined and agreed.

The plan does not reveal the geographic areas to be covered by each of the new regional integrated-care organisations, which will oversee the delivery of both hospital and community services.

The action plan says a road map and policy proposals will be developed on how to provide universal services at no or low cost to the patient/service user.

Mr Harris said Sláintecare would deliver a health and social-care service that met the needs of the population and attracted and retained the very best healthcare professionals, managers and staff.

“Our core objective is to shift the majority of care from the acute to the community setting to bring care closer to home for service users.

“This will help us reduce waiting lists and waiting times and ultimately meet our goal of improving population health. Over a 10-year period, Sláintecare will deliver a service that offers the right care, in the right place, at the right time.”

However the co-leader of the Social Democrats, Róisín Shortall, strongly criticised the Sláintecare action plan as “deeply underwhelming at a time of unprecedented crisis in our health service”.

Ms Shortall chaired the cross-party Oireachtas committee which produced the original Sláintecare plan in May 2017.

“It’s been almost two years since the detailed and costed Sláintecare report was produced based on unprecedented political co-operation – yet today we have another report on a report on a report, but still no proper budget,” Ms Shortall said.