A US special envoy to the North would be welcome, says Varadkar 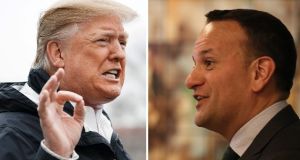 ‘Certainly if the president is open to wanting a special envoy to Northern Ireland that would be very welcome,’ said Leo Varadkar

The Government would welcome the appointment of a US special envoy to Northern Ireland, the Taoiseach has said ahead of his meeting with President Donald Trump on Thursday.

Speaking on the first day of official engagements in Washington on Wednesday, Mr Varadkar said that this week offered an opportunity to talk to US political leaders about Ireland’s position on Brexit. The Taoiseach added that it was also an opportunity to deliver the message that Ireland is a “good and reliable partner for the United States that is certain about its place in the world when perhaps other countries are not and are somewhat in chaos”.

“Certainly if the president is open to wanting a special envoy to Northern Ireland that would be very welcome. We know historically that when the United States has taken an interest in the affairs of Northern Ireland it has helped bring peace . . . so that will certainly be welcome,” he said.

Congressman Richard Neal told The Irish Times this week that he intends to raise the issue with Mr Trump during Thursday’s annual St Patrick’s Day lunch on Capitol Hill.

Mr Varadkar will have a packed agenda on Thursday, the centerpiece of which is a meeting with Mr Trump in the Oval Office.

His first engagement of the day is breakfast at the residence of vice-president Mike Pence in Washington which will also be attended by Mr Varadkar’s partner, Matt Barrett. He will later present the US president with the customary bowl of shamrock at a reception in the White House.

He added that, while the UK may impose tariffs in a no-deal scenario, the European Union will also apply a common external tariff to goods exported from the United Kingdom. “This will have a serious impact on the British economy and the economy of Northern Ireland.”