Speaking in US, Taoiseach warns possibility of UK crashing out of EU is ‘growing’ 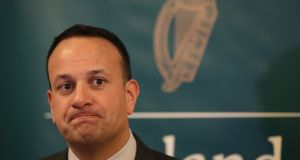 Taoiseach Leo Varadkar speaking at the US Chamber of Commerce in Washington DC during his visit to the US. Photograph: Brian Lawless/PA Wire

The Government is to bring forward a package of support measures for businesses, exporters and farmers to Cabinet next week, amid deepening concern about the possibility of a no-deal Brexit.

Speaking in Washington DC on Wednesday, Taoiseach Leo Varadkar said Tuesday’s vote in the House of Commons means that a no-deal Brexit is now a “growing possibility.”

“We are well placed to deal with any shock that might arise from no deal. The fact we have a budget surplus means we can borrow if we need to support our economy, the NTMA has cash on hand should there be any disturbance in the markets, the banks are well capitalised,” said Mr Varadkar, who is due to meet US president Donal Trump on Thursday.

He said the new package of measures to be agreed by Cabinet next Wednesday would provide income supports for those affected and business supports to help businesses restructure and pursue new markets.

“We want Irish exporters, Irish farmers, Irish fisherman and businesses to know that the government has their back.”

Mr Varadkar said the House of Commons still had the opportunity to avoid a no-deal. “It is very much in the hands of the British political establishment to take a no-deal off the table.

“The option is there for the House of Commons to take no-deal off the table tonight.

“What I’d say to people who were advocates of Brexit who perhaps voted against this deal, I’d ask them is this what “they really want. Was Brexit really about trade restrictions and protectionism, tariffs, borders, restrictions on trade, is this what Brexit was really all about?”

Asked about European Council Donald Tusk’s reference to a picture of a unicorn by a six-year old girl which he shared on social media on Wednesday, Mr Varadkar replied: “I think a lot of people that advocated unicorns have been chasing unicorns for a very long time and as we head into the next few weeks it should be patently obvious to everyone that unicorns only exist in fairytales.

“There is a supreme irony in that the proposals produced by the British government today propose to treat Northern Ireland differently to the rest of the United Kingdom when it comes to customs, and you will be aware that many of those who voted against the backstop did so on the basis that they feared Northern Ireland might be treated differently in a few years’ time.

“The UK proposals will treat Northern Ireland differently in a few weeks’ times in terms of customs, rules and regulations. Whilet he UK may impose tariffs in a o deal scenario, the European Union will also and a common external tariff will apply to any goods exported from the United Kingdom. This will have a serious impact on the British economy and the economy of Northern Ireland.

“In terms of what may happen in Northern Ireland I personally don’t think that the UK government’s proposals would be workable for very long. They propose to treat Northern Ireland differently from the rest of the United Kingdom in a few weeks time,” the Taoiseach said.

“ Let’s not forget one of the big objections to the backstop was that that might happen in a few years time. The UK government is proposing to treat Northern Ireland differently from the rest of the UK in a few weeks time and inevitably it would mean that Northern Ireland would become a backdoor to the European Single Market and I think within a matter of months that would lead to the need for checks at Northern Ireland’s ports.

“So those who oppose the agreement may find that something very akin to the backstop is applied by the UK government in only a few weeks time.

Looking ahead to his meeting on Thursday with President Donald Trump and congressional leaders, he said that this week offered an opportunity to talk to US political leaders about Ireland’s position on Brexit and deliver the message that Ireland is a “good and reliable partner for the United States that is certain about its place in the world when perhaps other countries are not and are somewhat in chaos.”

However, he said he was not asking the United States to “take sides” when it comes to Ireland and Britain.

Maradkar has confirmed that his partner Matt Barrett will be joining him in a meeting with US Vice President Mike Pence on Thursday morning. It comes after Mr Pence, who describes himself as a Christian and a conservative, extended an invitation to the couple last year during a meeting with Mr Varadkar.

Speaking in Washington DC, Mr Varadkar said: “He (Matt) was able to get time off work and make the journey, so he’ll be taking up the invitation from Mike and Karen Pence to attend tomorrow.

“Karen can’t be there because she’s in Abu Dhabi at the Special Olympics.”