The 23 men and one woman had enlisted in lowest ranks of Army, Naval Service and Air Corps 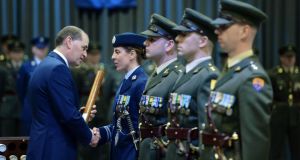 Minister for Defence Paul Kehoe greets members of the Defence Foirces at the commissioning ceremony of the 10th Potential Officers Course to the rank of officer at the Printworks in Dublin Castle on Tuesday. Photograph: Alan Betson/The Irish Times

“Ladies and gentlemen,” intoned Minister for Defence Paul Kehoe as he addressed the commissioning ceremony of the newest officers of the Defence Forces, “we are living in a changing society and face different threats to those of the past, including terrorism, cyber attacks and hybrid threats . . .”

At that stage, the emergency klaxon inside the Printworks building of Dublin Castle had been sounding for about a minute, a red light flashing in the corner of the hall and a high pitched “dee-daa, dee-daa” fire alarm puncturing the air.

But the Minister soldiered on gamely with his speech.

Senior officers shuffled uncomfortably in their seats or stared stoically ahead; a man from the Castle rushed in to whisper an explanation. The alarm blared on.

It was nonetheless a proud day for the newly commissioned officers, their families and friends.

The 24 men and women, who had enlisted in the lowest ranks of the Army, Naval Service and Air Corps, had risen to be non-commissioned officers. And because of their experience, outstanding leadership qualities and adherence to Defence Force values, they were handpicked for full commissions.

Yesterday, a year’s training in the cadet school came to an end for the 23 men and one woman and the members of the 10th Potential Officers Class became full officers, receiving their commissions and immediate promotions to the rank of either captain or lieutenant.

The 24 swore their oath in Irish, received their commission on parchment and listened as the musicians played Gabriel’s Oboe in their honour.

Parents, partners, siblings and friends looked on with pride, smartphones deployed to record the occasion.

The 24 included former corporal, now Lieut Brian Dunne, a great-grandson of Commdt Joseph Dunne who fought alongside Michael Collins in the War of Independence and who was in the GPO during the Rising; Captain, formerly battalion quartermaster sergeant, Stephen White whose family members have served in the Defence Forces since the foundation of the State; former corporal now Lieut Paul Murphy, an all-Ireland hurling medal winner from Kilkenny; and former corporal and now Lieut Jonathan Hughes whose colourful pre-Army career included a spell as a masseuse.

Collectively, the 24 have notched up 46 years’ overseas service through 94 individual missions with the United Nations.

They were all, said Mr Kehoe, “highly motivated and skilled officers”.

After six minutes and 21 seconds of the alarm, the place was finally evacuated, a mandatory precaution.

The trigger, it later transpired, was a rogue cigarette smoker in the toilets – an interloper, apparently, with no connection to the Defence Forces or the commissioning ceremony, which resumed after a brief evacuation.

The band played Amhrán na bhFiann and the new officers were formally dismissed, amid smiles and congratulatory embraces all round.