The US vetoes a draft UN Security Council resolution rejecting Donald Trump's decision to recognise Jerusalem as the capital of Israel. The 14 other members of the council voted in favour of the motion. Video: Reuters 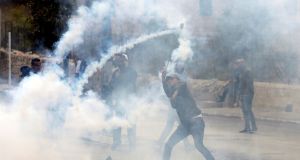 A Palestinian demonstrator is seen during clashes at a protest against US president Donald Trump’s decision to recognise Jerusalem as the capital of Israel. Photograph: Mussa Qawasma/Reuters.

The Department of Foreign Affairs has declined to say how Ireland will vote on a controversial UN general assembly vote later today which calls on the US to rescind its recognition of Jerusalem as the capital of Israel.

The US government has warned that the US will take votes against its position “personally”.

The Department of Foreign was unable to say what Ireland’s position on today’s vote would be despite repeated requests on Wednesday and again this morning.

A spokesman said that “discussions are ongoing in New York.”

“We won’t be making a statement until after the vote,” he said.

The US ambassador to the UN Nikki Halley wrote to her fellow UN ambassadors including Ireland warning them: “As you consider your vote, I encourage you to know the president and the US take this vote personally.

“The president will be watching this vote carefully and has requested I report back on those who voted against us,” she said.

Later Ms Haley tweeted that the US would be “taking names” of those who vote against it.

On Wednesday, US president Donald Trump threatened to withhold billions of dollars in aid from countries who vote against the US at the United Nations.

“Let them vote against us,” he said. “We’ll save a lot. We don’t care. But this isn’t like it used to be where they could vote against you and then you pay them hundreds of millions of dollars...We’re not going to be taken advantage of any longer.”

The general assembly vote comes after the US vetoed a security council resolution on Monday which contained similar criticisms of the Jerusalem decision.

At the security council, the US was isolated, with the members - including long-standing US allies - voting against it by 14 to one.

Ms Haley described the vote as “an insult” and warned “it won’t be forgotten”.

The recent recognition of Jerusalem prompted violence and protests across the Middle East and has been widely criticised as an unnecessary provocation, including by EU leaders at their recent summit.

Today’s vote on the motion reiterates 10 security council resolutions on Jerusalem, dating back to 1967, including requirements that the city’s final status must be decided in direct negotiations between Israel and the Palestinians.

It “affirms that any decisions and actions which purport to have altered, the character, status or demographic composition of the holy city of Jerusalem have no legal effect, are null and void and must be rescinded”.

The motion also “demands that all states comply with Security Council resolutions regarding the holy city of Jerusalem, and not to recognize any actions or measures contrary to those resolutions”.