Kieran Rose steps down ‘with regret’ from board following campaign allegations 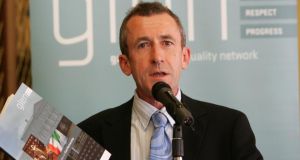 Kieran Rose said he was resigning from the board of Glen as the issue was causing a distraction to its work. Photograph: Frank Miller

Gay rights activist Kieran Rose has resigned from the board of the Gay and Lesbian Equality Network (Glen) following controversy over an unsuccessful Seanad campaign run from its offices.

Mr Rose said he was resigning “with regret” from the board of Glen as the issue was causing a distraction to its work and to other issues under review by the Charities Regulator.

Glen provided “temporary supports” – believed to be office space, printing and photocopying and computers – worth about €11,500 during his campaign for the Seanad last year, which were later repaid, he told The Irish Times. At the time, Mr Rose was co-chair of the organisation.

“At no point was there any reason on my part not to disclose this, and any breach of regulations that may have occurred was completely inadvertent. I regret that the arrangement has contributed to recent controversy.”

Mr Rose said he informed the board of the supports provided last December and tendered his resignation as he realised it should have been informed at the time.

However, the board, while accepting his resignation as co-chair, decided he should stay on as a member “given my vital contribution to Glen over several decades” and his role as co-founder.

Mr Rose, who works as a planner, said: “I regret that this issue has occurred and is causing a distraction from the important work of Glen and the other issues that are concerning it at present. I wish Glen board and its staff all the best in this vital work.”

In a statement, Glen said it had accepted Mr Rose’s resignation with regret.

It said its board acknowledged the €11,500 had been repaid.

“Nevertheless, Glen accepts that the use of such funds was in breach of good governance.

“In accepting the decision the board of Glen wishes to acknowledge the significant contribution made by Kieran over the past 30 years.

“As a trade union activist and founder member of Glen he has been a tireless champion and has worked to address social injustice and to seek to remove prejudice and discrimination,” the board said.

The controversy ensued after executive director Áine Duggan raised concerns with the board over governance and financial management at the charity.

The Charities Regulator, who was contacted subsequently, directed Glen to provide specific information including financial reports, details of staff credit cards and the report of an independent auditor.