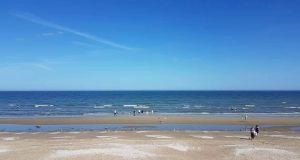 Termonfeckin beach, where a 14-year-old girl got into difficulties on Friday.

A 14-year-old girl has died after getting into difficulty while swimming at a beach in Co Louth.

It is understood she and two other youths who were swimming together may have been caught in a rip tide at Seapoint, Termonfeckin.

The Coast Guard said it had received a 999 call about a 14-year-old female swimmer who had gone missing at 14.34pm at the beach.

The helicopter recovered her from the water, before she was airlifted to Our Lady of Lourdes Hospital in Drogheda in a serious condition. She was later pronounced dead.

Gardaí said investigations into the incident were ongoing.

Earlier on Friday, Minister for Rural and Community Development Michael Ring urged the public to be vigilant over the weekend as incidences of drowning generally increased during warm weather.

“I urge people to be especially vigilant over the weekend as we enjoy good weather... our waters are a wonderful resource but, on average, 127 people lose their lives on them every year.”

He encouraged people to take basic precautions, such as staying in their depth, ensuring children were supervised and swimming in places where where lifeguards were on duty or in safe swimming areas where life bouys were present.

The accident in Co Louth occurred as the weather system over Europe provided a second day of sunshine and high temperatures in much of the country.

Temperatures did not reach the 28 degrees recorded on Thursday at Shannon, with the hottest temperature on Friday recorded 24.1 degrees at the Phoenix Park in Dublin, Met Éireann said. A temperature of 23.8 degrees was recorded at Finner in Co Donegal.

There was a thunderstorm off the west coast on Friday afternoon caused by the warm air from north Africa coming into contact with cooler air coming in off the Atlantic.

Meanwhile temporary bathing bans at beaches in Dublin have been lifted. Tests on Sandycove beach, which had been closed to swimmers after a sewage overflow following heavy rain, showed the water quality there had returned to normal.