Lack of critical thinking in schools and society a concern - Higgins

In a speech to mark World Philosophy Day, the President criticised what he called a “deep anti-intellectualism” in the media and a lack of critical thinking in schools and society. 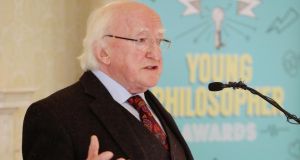 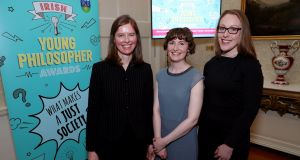 Dr Danielle Petherbridge (left) and Dr Áine Mahon (centre), both from UCD, with Elizabeth O’Brien, teacher at Our Lady’s School in Terenure, Dublin at the launch the the Irish Young Philosopher Awards at Áras an Uachtaráin. Photograph: Maxwell Photography 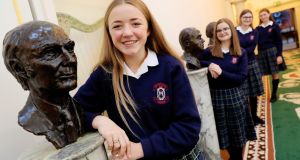 Rebuilding social cohesion in Europe will not be achieved by the “rhetorical flourishes” of French president Emmanuel Macron and others but requires fundamental reform to the economic model, President Michael D Higgins has said.

In a speech to mark World Philosophy Day, the President criticised what he called a “deep anti-intellectualism” in the media and a lack of critical thinking in schools and society.

“The challenges of the next decade simply cannot be met with the old orthodoxies. We need mind work,” he said. “Social cohesion is fracturing, fading, as inequalities in wealth, power and income are deepening, and they will not be met - with the greatest respect to president Macron and others - by rhetorical flourishes on the model that is fading, or the paradigm that is insufficient.”

Mr Higgins was speaking at Áras an Uachtaráin at the launch of the Irish Young Philosopher Awards, which has been set up along the lines of the BT Young Scientist Awards as a showcase for original thinking for primary and secondary students.

Warning against an overemphasis in Irish education on STEM (Science, Technology, Engineering and Maths), the President said technical literacy was necessary to prepare young people for the world of work.

“Yet in conditions of change it is surely important to have the capacity to generate the questions, listen to the suggestions as to how we might live together sustainably in an ethical way.”

He continued: “Across the European Union as we read policy suggestions for the future there is evidence of an impatient drive for what will prove to be, I believe, a misguidedly utilitarian approach to education.

“Such short term thinking is increasingly taking hold and thus the initiation of these awards is an important milestone.”

Philosophy was this year introduced as an optional short course under the new Junior Cycle programme, and the organisers of the awards hope the initiative will boost the uptake of the subject in schools.

Mr Higgins said if we wished for responsible citizens in the future “we must ensure that our children learn to think and question from a very young age, rejecting the easy option of going with the flow.”

“We need philosophy and we need discussions of what is moral.”

To that end, Mr Higgins recommended the creation of a short guide “on the principles of fair argument”.

The anonymity provided by social media has contributed to “a subculture of polemical abuse, aggression and anger that serves to block access to truth, wisdom or compassion, not to speak of being an obstacle to our achieving justice”.

One of Mr Higgins’ first acts on taking up office was setting up the President of Ireland’s Ethics Initiative. “I did not initiate that project for rhetoric,” he said.

Questioning the assumptions of the neo-liberal position “drew abuse,” he said. And while people were entitled to defend economic ideologies, “they really must be open to allow others to debate in a pluralistic way, and I give it as an example of the polemical abuse that stood as an alternative to scholarship”.

On the challenge in Europe, Mr Higgins said: “Within the European Union, cohesion between the member states has declined. We have allowed ourselves to become divided by a common, one size fits all, inadequate macro-economic policy framework which pits creditor against debtor, and those with trade surpluses against those with deficits. How could that be the language of a union…?”

Other speakers at the event included Susan Andrews, a teacher at Temple Carrig School in Greystones, Co Wicklow, who highlighted the benefits of philosophy in boosting students’ confidence and critical thinking.

Submissions for the first Irish Young Philosopher Awards opens in December, and the winners will be featured at a festival of ideas at UCD next May. https://youngphilosopherawards.ucd.ie/