Homelessness in Ireland is ‘not normal’, says charity head 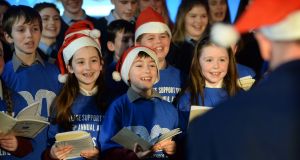 The president of the Society of St Vincent de Paul has criticised Government politicians’ recent comments about homelessness. Speaking at the launch of the society’s Christmas appeal, Kieran Stafford said Irish society “cannot and must not” accept that people are living in or on the verge of poverty. “We all know from some of the commentary around at the moment that some people would like us to think that’s normal,” he said. “Ask any young mother who’s trying to bring her children up in a hotel room whether that’s normal. It absolutely is not.”

Taoiseach Leo Varadkar said at the weekend that homelessness in Ireland was not high by international standards, and Minister of State for Housing Damien English told the Dáil on Tuesday that a “negative narrative” on homelessness in the media was hurting Ireland’s reputation.

Despite the economic upturn, Mr Stafford said, SVP was still dealing with thousands of families who were struggling to put food on the table. People on low incomes who had been hardest hit during the recession were the slowest to benefit from the recovery. There were 139,000 children in consistent poverty, “which means that they’re missing a number of meals every week, that they’re in homes that are not heated. That is what we’re experiencing, that is the story that we’ll continue to keep telling. Because it’s so important that we fix this problem.”

Asked about criticism by Eileen Gleeson, director of the Dublin Region Homeless Executive, of volunteers who give food and clothing to rough sleepers, Mr Stafford said he thought people who volunteer would be upset by the comments. “I understand completely where Eileen is coming from,” he said. “Everybody wants to see a professional service where everybody’s protected and everything is done right. Unfortunately, the reality is that that isn’t the case, hence the need for volunteers who are going out to help people with hot meals.”

Mr Stafford said there were two types of homelessness. “There’s the rough sleepers and there’s the families in emergency accommodation. We help both and we see both. I can understand that everybody wants to fix this problem, but I don’t think it’s helpful to say that very well-intentioned, good volunteers who are going out feeding people and ensuring people aren’t starving – and many of our members actually do that – that it would be better if they didn’t do that.”

He said that rough sleepers who stay at night hostels were put out at 9am and couldn’t get back in until 9pm. “Some people are actually going to A&E, sitting there for three or four hours just to get the warmth and keep out of the weather. How crazy is that?”

SVP’s appeal message this year is that “Christmas is not the same for everyone”; it seeks to raise awareness that families can find themselves in financial difficulties not just at Christmas but throughout the year. Mr Stafford said the society expected to receive 125,000 calls again this year and was regularly coming across working families who were just about making ends meet. “We have many people from working backgrounds who are struggling to provide the normal, essential things in their home,” he said. “The cost of rent is really impacting on family incomes. People are paying top-ups; they’re having to contribute quite a lot of their income towards ensuring they can pay the rent.”

As well as making donations directly, there are other ways of supporting SVP’s work at svp.ie/appeal. These include the Giving Tree Appeal, the Food Appeal and a virtual gift store.