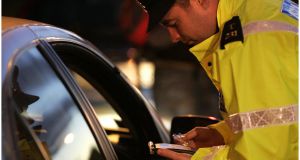 The discrepancy found in the Cork and Kerry regions was so significant that Garda management ordered a nationwide audit. Photograph: Dara Mac Dónaill

The operation of drink-driving checkpoints across the State is being audited after it emerged that the number of breath tests recorded on the Garda Pulse system appears significantly higher than the number of motorists tested.

The audit began after the Medical Bureau of Road Safety in 2015 noticed a significant discrepancy in the number of disposable mouth pieces for breath test screening devices being ordered by gardaí compared to the number of breath tests being recorded on Pulse.

The discrepancy prompted a detailed examination of breath test data and procedures in the Cork and Kerry Garda regions and an analysis of screening devices into which a driver blows during a roadside test.

The examination found the number of breath test results uploaded to Pulse from the Cork and Kerry regions was 17 per cent higher than the total suggested by the screening devices and used mouthpieces.

A senior garda said it was unclear whether officers were deliberately inflating breath test figures on Pulse or were simply careless when recording the information.

He said data from screening devices was manually uploaded to Pulse and data entry errors were possible and there was no evidence of a sinister motive.

However, the discrepancy found in the Cork and Kerry regions was so significant that Garda management ordered a nationwide audit of how Mandatory Alcohol Checkpoints (MAT) are conducted and how data from checkpoints is recorded on to Pulse.

As a result of this audit, no breathtest or MAT data has been published on the traffic section of the Garda.ie website for 2016 due to concerns the figures may be incorrect.

The Medical Bureau, which has responsibility for the provision and calibration of roadside screening devices, found the number of mouth pieces ordered nationally was significantly below what would be expected given the breath test figures on Pulse.

For hygiene reasons and to avoid contamination from another driver, a new mouthpiece is used for each motorist breathtested.

Each screening device has a counter which records the number of complete tests carried out.

Separately, The Irish Times is aware of alleged incidents where it has been claimed a garda breathtested themselves before uploading the results to Pulse as allegedly the outcome of a MAT checkpoint.

In one such case a witness told this newspaper they observed a garda breathtest themselves multiple times in a Garda station before uploading that information on to Pulse as the supposed outcome of a checkpoint, with “no detections” recorded.

This person has brought their concerns to the attention of the Road Safety Authority (RSA) and the Department of Transport but has not yet made a protected disclosure or a formal complaint.

Senior gardaí said while they are aware of such reports, they had no reason to believe that this behaviour, if true, was widespread.

A spokeswoman for Minister for Transport Shane Ross confirmed an individual had raised concerns with the RSA about an alleged incident at a Garda station. “The person made allegations but was not willing to go a formal route or go on the record.”

The spokeswoman said the RSA had raised concerns over breath tests directly with the gardaí.

A spokesman for the RSA said it was aware of the national audit being conducted by the Garda and “we are satisfied that it is being dealt with appropriately”.

All data from a MAT checkpoint – including THE number of drivers tested, detections (if any), time, date and location – are entered manually by gardaí on to Pulse.

It is understood concerns over the quality of the breath test data has prompted the Medical Bureau to bring forward discussions with the Garda on the provision of next-generation breathtest screening devices.

These devices would have the ability to automatically record the time, data and location of a breathtest and may allow for a direct upload of this data to Pulse, removing the manual data entry.

For data protection reasons, the licence plate and driver licence details of motorists breathtested are unlikely to be recorded.