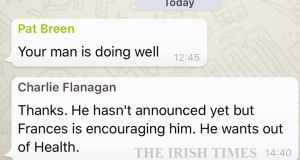 A screengrab from the Fine Gael Whatsapp group showing Charlie Flanagan’s comment that Simon Harris wants out of the Department of Health.

Minister for Foreign Affairs Charlie Flanagan posted a message in the internal Fine Gael Whatsapp group on Sunday morning saying Mr Harris wants to “get out of health”.

“He hasn’t announced yet but Frances is encouraging him,” wrote Mr Flanagan. “He wants out of health.”

The Whatsapp group is for the entire Fine Gael parliamentary party.

Fine Gael sources sought to downplay but did not deny the suggestion that Mr Harris will ultimately make a bid for the leadership when Taoiseach Enda Kenny, as expected, makes clear the timeline for his departure.

The source described the message as a “silly briefing” and said “people are getting caught out” by putting messages in the wrong Whatsapp group.

“Charlie seems to be suggesting that Simon is going to announce a leadership bid,” said a source.

“That’s like saying ‘Leo [Varadkar] wants out of Social Protection’ or ‘Simon [Coveney] wants out of Housing’,” and that is why they are interested in the leadership.

Working as hard as I possibly can in my job as Health Minister. Lots to do! No intention of engaging in idle speculation 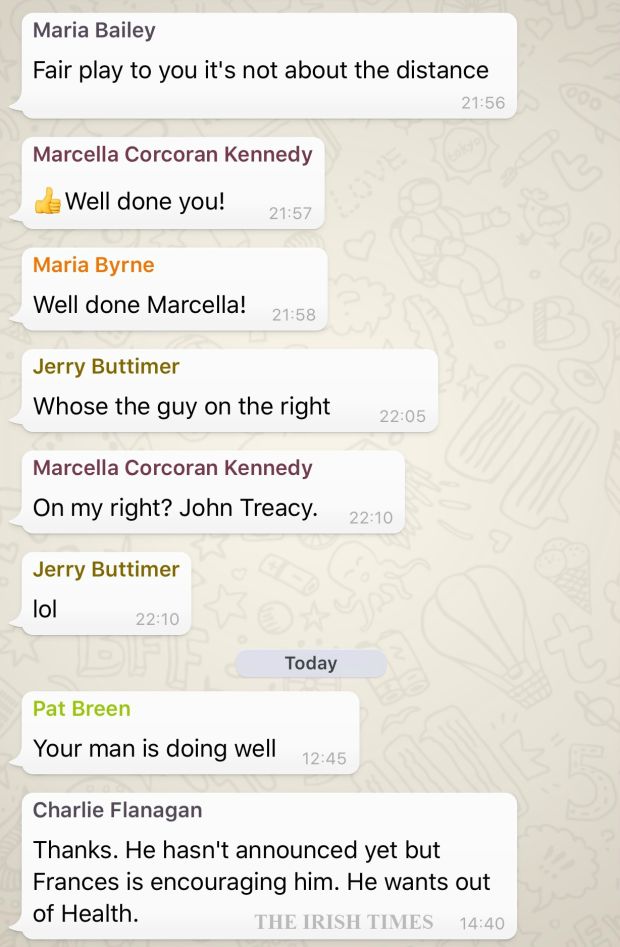 A spokesman for Mr Flanagan claimed the message was “tongue in cheek”.

Mr Harris later tweeted that he still had work to do as Minister for Health and would not engage in “speculation”.

“Working as hard as I possibly can in my job as health minister. Lots to do! No intention of engaging in idle speculation,” he said.

Mr Varadkar and Mr Coveney are the only two Fine Gael figures who have made clear their intention to contest the leadership when the contest begins. Minister for Public Expenditure Paschal Donohoe has ruled himself out.

Other senior Fine Gael figures including Mr Harris, Ms Fitzgerald and Minister for Education Richard Burton are understood to be considering entering the race.

The leaked Whatsapp message comes as Mr Coveney called for a speedy transition in the Fine Gael leadership after St Patrick’s Day.

Mr Coveney said Mr Kenny should go to Washington next month but hoped for an orderly change soon afterwards.

Mr Coveney told RTÉ’s The Week In Politics: “My opinion is that the Taoiseach should go to Washington because there has been a huge amount of work in preparation for that visit and it is in the country’s interest that he go.

“But I think after that visit you will see, I hope, an orderly and quite a quick transition after that to a new leadership within Fine Gael.”

He added: “But I trust the Taoiseach to use his own judgment on this, he has been around a long time and my sense is that he will provide that certainty quickly.”

Mr Kenny had committed last year to stepping down as Taoiseach before the next election.

But questions over his future circulated in recent days amid criticism over his handling of allegations of corruption in policing and his minority coalition Government being forced to launch a public tribunal of inquiry into the treatment of whistleblower Sergeant Maurice McCabe by senior gardai.

Mr Coveney has already warned against trying to force the Taoiseach out and said ousting him would be wrong. Mr Varadkar has said the Taoiseach will know when the time is right to step aside.

There had been speculation recently that the political fallout might culminate this coming week in a vote of no confidence in Mr Kenny by his colleagues.