Three of five main parties headed by women, but this doesn’t translate to rank and file 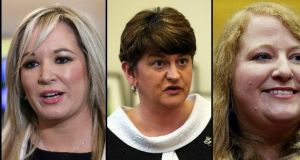 Despite the leaders of Northern Ireland’s two largest parties being women, female candidates make up less than a third of the candidates vying for election.

Prof Yvonne Galligan, director of the Centre for Advancement of Women in Politics at Queen’s University Belfast, says legal quotas would be helpful.

“It is the way to break that tendency to be biased in favour of selecting males, particularly when the competition gets tight,” she said.

“Just having quotas in place changes the conversation in political parties and makes it much more normal for women to be considered as candidates.”

Prof Galligan says it is important for both young men and women to see women of all ages filling political leadership roles.

“It is also important for any woman with ambitions to be a leader in their own field as well,” she said. “In a way politics is one of the last bastions of male privilege in our society.”

Arlene Foster has been running the DUP since 2015 and last year Naomi Long took over as Alliance Party leader.

Clare Bailey is deputy leader of the Green Party in the North, which took two seats last year and has nine men and nine women in contention this time.

She says quotas should be used as a short-term measure as they are “the quickest way to address the imbalance that we have in public life”.

The Women’s Coalition, former PUP leader Dawn Purvis and the SDLP’s former leader Margaret Ritchie MP are among those credited with blazing a trail for women in politics in the North.

A relatively diverse range of women are on the campaign trail at the moment, such as PBP South Antrim candidate Ivanka Antova, who is originally from Bulgaria.

It is accepted there is much work to be done to encourage women from different ethnic, minority and class backgrounds into public life but progress is slowly being made.

The PUP’s Belfast North candidate Cllr Julie Ann Corr, one of just a few out lesbian politicians in Northern Ireland, is seen as providing a strong voice for the loyalist community.

Ellen Murray, the first trans woman to stand for election on the island of Ireland, is on the ballot again for the Greens in Belfast West.

She has been applauded for her role in enhancing the visibility of trans people in public life.

Widely regarded as some of the strongest political performers during the last mandate were SDLP women Claire Hanna and Nichola Mallon.

Both are mothers, both are heavily pregnant at the moment, and their presence in the Assembly with visible baby bumps was seen by some as a positive symbol of female empowerment.

Indicating the unique challenges political life can pose for women, Ms Hanna joked on Twitter that “being this pregnant”and elections were not the ideal combination and made a tongue-in-cheek call to borrow a Segway to ease the journey between houses where she is busy knocking on doors and promoting her party message.

Socialist, feminist teenagers are among the youngest candidates in the race, such as Pádraigín Mervyn (19) in Belfast South for PBP and Courtney Robinson (19) in East Belfast for Labour Alternative.

Ms Robinson said: “There is a narrative out there that ‘Good Friday Babies’ are completely apathetic people not interested in politics and their futures.

“But if you talk to friends your age, they just aren’t interested in the politics of discrimination and sectarianism where nothing actually gets done. So I want to fight for working class interests, young people’s rights, abortion rights, LGBT rights, university places and jobs.”

Integrated education expert Noreen Campbell will spend her 67th birthday campaigning to win a seat for Alliance in Fermanagh and South Tyrone.

She says she is “seeking to give a voice to and a choice for those who reject tribal politics, who are angered by corruption and cronyism and who are seeking change”.

“Where positive change can be seen is in the complete acceptance that there is nothing exceptional or unusual about an older woman on the campaign trail,” she said. “I welcome this change for good.”

Prof Galligan warned that “the older women get, the more invisible they can become”, so having women in their 50s and 60s up for election is vital.

“I am so delighted to see young women come through, but I totally agree that it is necessary to have a wide range of women selected from all ages and all backgrounds to represent the diversity of women in the population we have.”