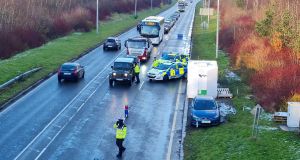 The checkpoints were switching between different sides of the road, meaning people travelling to or from the airport were being checked at different times. Photograph: Conor Lally

Gardaí conducted Covid-19 checkpoints on the Dublin Airport campus and on approach roads to and from the airport over the weekend in a new operation that effectively extended domestic travel restrictions to international travellers.

On Sunday, The Irish Times was stopped at three Garda checkpoints driving to and from the airport, at which most vehicles were being stopped and some drivers were taken out of lines of traffic for enforcement action to be taken against them.

The checkpoints were switching between different sides of the road, meaning people travelling to or from the airport were being checked at different times. One major checkpoint was located at the bottom of the M1, just past the entry and exit point for the Port Tunnel, and operated from 7am until 9pm.

Teams of gardaí were engaging with three or four drivers simultaneously and all drivers were being spoken to except when large tailbacks built up and gardaí waved some vehicles through to ease the congestion.

At another smaller checkpoint on Swords Road, between Morton Stadium in Santry and Dublin Airport, every vehicle was being stopped and drivers spoken to, with that checkpoint also switching between the carriageways to check traffic in both directions.

The checkpoints in and around the Republic’s main airport were repeated, Garda sources said, at other airports and at ports. They are part of a much tougher crackdown on domestic and international travel that followed €100 on the spot fines being introduced two weeks ago and the number of enforcement actions soaring since then.

Gardaí were also carrying out checks at major train stations. Passengers in Heuston Station, Dublin, were being stopped before boarding their train and were asked the purpose of their journey. One passenger said he had come from the airport and when he explained this to gardaí, he was asked to produce his boarding pass and proof his journey was for an essential purpose.

While the fines had been available to gardaí as an enforcement tool for some time, Garda Commissioner Drew Harris instructed that all cases should be routed through the DPP’s office. However, from Monday, January 11th, the IT systems required for gardaí to impose the fines without a direction from the DPP saw the fines truly become “on the spot”. And in the first 12 days of operation, up to last Friday, almost 1,000 fines were imposed.

That represented a switch towards much higher levels of enforcement by gardaí. Previously enforcement action was only taken against people found to be making non-essential journeys and who then refused to return home after being spoken to by gardaí.

Flights and sailings to and from the Republic have continued throughout the pandemic, albeit significantly reduced services. However, gardaí have now warned that anyone travelling to take a flight or ferry for a non-essential reason can be fined in the same way people travelling further than 5km from home were being sanctioned under the “on the spot fines”.

“Various checks on public health regulations at ports and airports [on the spot fines] can be issued for non-essential travel, including non-essential international travel.”

The road checkpoints around airports and ferry terminals have been introduced at the same time that new rules apply to travellers.

From midnight last Friday all passengers arriving into the State, at airports or ferry ports, are required to have the results of a PCR test from the previous 72 hours showing they were free of Covid-19.

Failure to produce proof of a negative test result is a “penal” provision, meaning it is enforceable under law. It can result in a conviction in the courts, with sanctions up to six months imprisonment and/or a fine of up to €2,500.