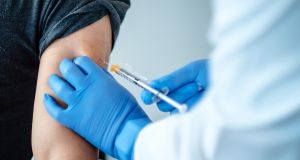 Of the 7% of people who say they will not take a vaccine, the level is highest among 25- to 34-year-olds

Three-quarters of people in the Republic will take a Covid-19 vaccine, while 25 per cent are either unsure or actively against taking it, according to a survey by Ipsos MRBI for the Irish Pharmaceutical Healthcare Association (IPHA).

As vaccination programmes against the virus are rolled out across Europe, so are campaigns discrediting vaccines led by so-called “anti-vaxxers”.

The results of the IPHA survey show that 75 per cent of people here are willing to have the vaccine ,while almost one-fifth, or 18 per cent , said they were unsure. Some 7 per cent said they would not take one.

Willingness to have the vaccine is reportedly 77 per cent in Britain and 69 per cent in the US, but as low as 40 per cent in France, which has a strong anti-vaxx culture.

The results of the Irish survey reveal that as many women as men, or 75 per cent, say they will take a vaccine.

The age group most likely to take a vaccine were the over-65s, followed by people aged between 55 and 64. In these groups, 86 per cent and 80 per cent respectively said they were willing to get immunised.

Of the 7 per cent of people who said they will not take a vaccine, this level was highest among 25- to 34-year-olds.

IPHA said the figures show a 20-point rise in the number of people willing to take a Covid -19 vaccine since a similar poll was conducted last October.

It said the biopharmaceutical “breakthroughs”were guided by safety, quality and efficacy, and urged people to get immunised as vaccines are rolled out.

“Our latest survey shows there is a strong public appetite for taking a Covid-19 vaccine,” said IPHA chief executive Oliver O’Connor. “Immunisation on a sufficient scale is all that separates us from an indefinite series of lockdowns.

“It is vital that as many people as possible get vaccinated so that we can all return to normality, or at least some version of it,” he said.

Mr O’Connor called on people to bear with the health authorities as they roll out the vaccination programme nationwide.

“Our public health experts and officials, as well as frontline healthcare workers and the Government, are working hard to inoculate the population on a phased basis. That will take time so we should try to be patient.”

As of last Thursday more than 260,000 people on the island of Ireland had received their first Covid vaccine.

The Republic has administered 121,900 vaccines so far, equating to 2.5 per cent of the population.

Minister for Health Stephen Donnelly said 73,100 of the doses were given to frontline healthcare workers, and 48,800 were received by people in long-term care facilities.