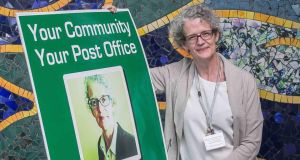 Barna postmistress, Seona O’Fegan intends to stand in the Galway West constituency as a member of the Community and Post Office Candidates Group. Photograph: Pat Moore

Galway postmistress Seona O’Fegan has initiated her Independent candidacy for the next general election with a pledge to fight for the “vibrancy of communities” threatened by “State withdrawal and privatisation”.

Ms O’Fegan is one of eight such candidates contesting the next election, following a vote in May by members of the Irish Postmasters’ Union to run a political campaign.

Ms O‘Fegan is postmistress at the Barna village and Fr Griffin Road branches in Galway, and will stand in Galway West.

The mother of four children between 17 and 23 years old aims to secure election on a platform of “better services for communities”.

Some 1,100 post offices across the State aim to support the union’s campaign, which, Ms O’Fegan says, “represents the best strategy for securing our future”.

“Through my work as a postmistress, every day I listen to and discuss the concerns and needs of people,”she says.

“What I hear very strongly is a need for greater Government support for vibrant communities, where people can access the essential services they require and can do their day-to-day business,”she says.

Ms O’Fegan said that the State appeared to be “withdrawing from communities”, and the post office network represented the “last link”.

She stressed that her candidacy was “not just about the post office” but about fighting for stronger policies and more investment in areas which are vital for communities, including schools, health services, transport and jobs.

The Community and Post Office Candidates group – banner for Ms O’Fegan and seven colleagues – is “not a new political party” and is not aligned with other groups, her union stressed.

“Current Government policy is forcing customers to the commercial banks and will lead to major post office closures,”she said.

“Banks, large corporations and the financial services sector have too much power in deciding what type of country we live in,”she said.

“Repeated governments have failed to place enough value on the real experience of where we live, and how we live,”she said.

“We know that when a post office closes, it is followed by further local business closures and the heart is torn out of the community,” she said.

This was not just an issue for rural communities, but also for urban areas such as Fr Griffin Road, which was used by people living in Galway’s Claddagh, she said.

“The Department of Social Protection contract is vital for post offices, but those offices are also a lifeline for essential daily contact between people,”she said.

She also urged people to engage with the consultation on the Kerr report, which is published on the Department of Communications, Energy and Natural Resources website.

Ms O’Fegan took over running Barna post office from her mother-in-law, Noreen O’Fegan, in 2003, and took over the Fr Griffin Road branch in December, 2014. She has been secretary of the Galway/Tuam branch of the postmasters’ union.