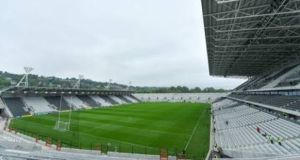 Senior GAA officials plan to recommend that a tribute soccer match for the late Liam Miller be played at Páirc Uí Chaoimh.

But as part of a compromise with organisers, it will take place alongside a fundraiser for seriously injured GAA players, The Irish Times understands.

The GAA’s management committee, which consists of 15 members including the president, director general and four provincial chairmen, met on Friday evening to discuss the issue in advance of a central council meeting on Saturday.

The Irish Times has learned the management committee is set to recommend the game go ahead at the Cork GAA ground but a GAA challenge game will precede the soccer match and some of the proceeds will go to a benevolent fund for seriously injured GAA players.

The GAA has come under increasing political pressure in recent days over its refusal to make Páirc Uí Chaoimh available for the benefit game for Miller, a father of three, who played soccer for Glasgow Celtic, Manchester United and the Republic of Ireland among others.

Miller died in February at the age of 36 from oesophageal cancer and the organisers of the tribute match hope to raise funds for his widow, Clare and three young children, Kory, Leo and Belle with some of the proceeds going to Marymount Hospice in Cork where he died.

Tickets for the game between a Manchester United Legends XI and a Glasgow Celtic/Republic of Ireland XI, which is currently scheduled for the 7,300-seater Turner’s Cross, sold out within minutes but the organisers hope that if Páirc Uí Chaoimh, which has a capacity of 45,000, is made available, thousands more fans will want to attend to pay tribute to the Ovens born sportsman.

Minister for Sport Shane Ross and Minister of State at the department Brendan Griffin have both urged the GAA to make Páirc Uí Chaoimh available while other senior political figures such as Tánaiste, Simon Coveney, and Fianna Fáil leader Micheál Martin.

However last Friday, the GAA said it was prohibited in rule from hosting games other than those under its control in its stadiums. The Cork county committee and central council have no discretion in this matter and only a change at annual congress in February can change this, it said.

But other figures, including former GAA president Seán Kelly, who oversaw the opening up of Croke Park to rugby and soccer while Lansdowne Road was being rebuilt, have expressed the view that the rules as they stand do allow for a once-off charity event at grounds owned by the GAA.

The use of GAA property including stadiums is set out in Rule 5.1 which states they shall be used “only for the purpose of or in connection with the playing of the games controlled by the association, and for such other purposes not in conflict with the aims and objects of the association”.

It is understood the Liam Miller Benefit Match organisers emphasised the charitable nature of the game and reassured the GAA leadership that as a consequence and the fact that all the players are retired from competitive soccer means it could be argued that it is “not in conflict with the GAA”.