Derided by some as ‘chancer’, DUP man and family legacy likely to survive suspension 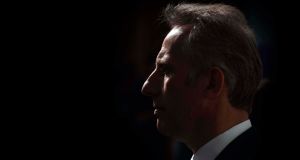 Watching Ian Paisley in the House of Commons apologising for taking free holidays worth up £100,000 in Sri Lanka, choking back tears as he did, Quentin Letts, the Daily’s Mail’s theatre critic, was impressed.

“All I can say, donning my drama-critic cape, is that if he was indeed faking that emotion, we could do with more like him on the stage, dearie. The only actor I have seen produce comparable waterworks is Sir Kenneth Branagh. ”

Back in Antrim, Jim Allister, leader of the Traditional Unionist Voice party, himself a master of the curled lip and contemptuous tongue, thought the Democratic Unionist Party MP for North Antrim had protested too much.

However, Allister, a local Assembly member, knows full well that “Junior”, as many call him, while down is far from out. There is a line of opponents out to damn him, but equally there are thousands locally who will stand by Paisley and the Paisley family.

On Tuesday, Paisley’s wife, Fiona, posted a single-word tweet, stating “schadenfreude” with a shark swimming underneath. It was a little ambiguous, but it appeared to signify that she sees his opponents delighting in her husband’s ill fortune.

In Ballymena and surrounding districts, “there is considerable dismay that he was as brazen as he has been in accepting the largesse of a government and then going on and becoming their advocate”, says Allister.

“His core [support] is pretty difficult to shock but he is certainly damaged by it, as he should be,” added Allister, who like Paisley is a diehard Brexiteer. And that is what has really galled the TUV leader.

With key votes so tight at Westminster, the loss of one of the 10 DUP MPs could have serious consequences: “If it should turn out that the price of his antics is a diminished Brexit then that will be his shameful legacy for all time,” Allister goes on.

Sanctioning an MP who enjoyed a 20,000 majority last time is difficult: “I think the hierarchy would dearly like to be rid of him, and not just because of this, but I don’t think they have the bottle to face him down,” says the TUV leader.

In Allister’s view, Paisley will stand as an independent if a byelection is called and if the DUP does not stand by him: “I think they will swallow hard and make their peace with him,” he tells The Irish Times.

From September 4th, Paisley will be suspended from the Commons for 30 sitting days. The DUP has suspended him, too, but it is not clear for how long. And neither side will yet say what will happen if a byelection is triggered.

Under the rules, a byelection can occur if 7,500 of North Antrim’s 75,000 voters petition for one. Faced with such a prospect, Allister believes that Paisley would resign and kick off the contest himself.

In Ballymena, the heartland of Northern Ireland’s ‘Bible belt’, reactions vary. However, there is no great surprise that once again he is in trouble. Many locals have long since seen him as a brass-necked “Del Boy”, always ducking and diving to stay ahead.

Memories linger of how he was forced to stand down as a junior minister in the Northern Executive 10 years ago following allegations that he had lobbied on behalf of a local property magnate. Paisley insisted he had done nothing wrong.

Supportive locals accept the importance of the Paisley name in North Antrim and the work he has done for his constituents, but even here there is “disappointment” that once again he is making negative headlines.

Standing outside the Fair Hill shopping centre, a woman, taking a smoking break, was more forgiving about his free holiday habits: “He could have done a lot worse. So what, big deal, he is only human like the rest of us,” she said.

Even if the holidays could have been worth up to £100,000 and that he had advocated for a country with a bad human rights record? “It doesn’t matter,” she said. “He should get a slap on the wrist and that’s it, honestly.”

She had kept faith with “his Da” and would do so now with him: “Ian is hardworking. Yes, I would vote for him again. I would be very forgiving, and I think a lot of people will be. He has apologised and what more can he do?”

There are other unionist views, though, some mocking. One shopkeeper is doubtful: “If his memory is so bad that he forgot to declare £100,000 holidays, how could you depend on him doing anything for you?”

If his memory is so bad that he forgot to declare £100,000 holidays, how could you depend on him doing anything for you?

Like others, though, he did not believe Paisley is finished. “Ballymena people seem to be brainwashed by him,” he said. On Wellington Street, however, a middle-aged unionist thought it was time to end the Paisley dynasty.

“[Still] the Paisley name carries far and Ian does good work here,” he said, allowing how Dr Paisley held the seat from 1970 to 2010, replaced by his son: “People in public office are expected to keep certain standards and if they don’t they have to go.”

Nationalists, though, are even less surprised. One nationalist woman thought the DUP “kind of have to keep him”; an Alliance voter from a unionist tradition felt the same. Even her DUP-supporting mother is now “asking more questions” about him.

Ultimately, however, it will become a matter of Orange and Green: “It seems to be that in this part of the country people don’t even have to work for their vote,” the daughter declared, standing with her mother.

Local politicians are more partisan. Many locals are describing him as “a ‘complete chancer’” , says Ballymena SDLP councillor Declan O’Loan, saying any politician should run from people “offering large-scale hospitality – not just to yourself but to your family”.

Potential to be unseated

Two years ago, Daithí McKay was forced to stand down as a Sinn Féin Assembly member following a claim that he had coached loyalist blogger Jamie Bryson to make allegations of financial impropriety against Peter Robinson, claims that the former DUP first minister strongly rebutted.

Now working for the Royal Society for the Protection of Birds in Tyrone, McKay believes Paisley can only be unseated if others unite around a single candidate – an idea floated on Thursday by SDLP leader Colum Eastwood.

By teatime that day, the idea was dead. Sinn Féin, the Ulster Unionist Party and Alliance were not interested. Party rivalries do not help, but there are real complicating factors, too, that make agreement near-impossible.

Sinn Féin has a Westminster abstentionist policy. The other parties have differing views on Brexit, but on other issues, too. And it hardly needs saying that none of them will find common cause with Jim Allister’s TUV.

Knowing North Antrim, McKay said “It’s not a question if he is to be defeated but how big a dent this all makes in his vote. There will be a drop to one degree or another, but he may come out without any serious damage.”

Locally, the DUP is staying quiet. Assembly member Paul Frew did not respond to questions, while Paisley was not available at his office in Church Street: “He is doing not too bad,” said his secretary Laura with a smile.

Dessie Blackadder, editor of the Ballymena Guardian, managed to elicit a statement from Paisley for this week’s edition, where Paisley apologised, but tried to muddy the waters, claiming that the registration rules are confusing.

Denying that he had broken regulations by advocating on behalf of the Sri Lankan government, Paisley argued that “our own country has a government made up of terrorists [so] it always amazes me just how arrogant some commentators here can be about other world regimes”.

Locally, Blackadder says a majority believes that Paisley has been “caught out” and must take his punishment, adding that the controversy for a politician “with a major image problem” still has several weeks to run.

However, the numbers favour Paisley. With 28,521 votes, he polled highest in last year’s Westminster election and his nearest challenger, Sinn Féin’s Cara McShane, was on 7,878 votes. Combining the votes of all his opponents, Paisley was still ahead by close to 8,600 votes.

So, barring surprises, the Paisley name will endure, as it has for 48 years since his father was first elected, judging by the encomium from the DUP North Antrim chairman John Finlay in the Ballymena Guardian.

“I am immensely proud to have Ian Paisley as my MP. He is not just an outstanding public representative but a true friend. He is a great unionist and an articulate communicator for the causes he espouses. He is quick to help and slow to anger. In short he is a good man.”

Mindful of the local unease about Paisley among North Antrim unionists, Allister still points to the scale of the challenge that will face him if voters do have to go to the polls: “But nothing is impossible in politics,” he said.