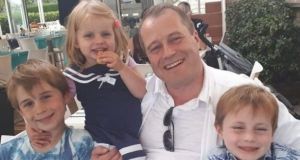 The funeral of three young children who were found dead at their family home in southwest Dublin last week will take place on Friday morning.

The bodies of Conor (9), Darragh (7) and Carla (3) McGinley were discovered in their home at Parson’s Court in Newcastle just before 8pm on Friday, January 24th.

The children’s death notice says a Mass of the Angels will be held in the Church of The Holy Family, Rathcoole, on Friday morning at 11am, followed by a burial in Newcastle Cemetery.

The McGinley family are requesting family flowers only and donations, if desired, should be sent to the Rathcoole Boys Football Club, Scoil Chrónáin, Rathcoole or Happy Feet Early Learning Centre, Rathcoole.

The notice says the three were “cherished children” who are “sorrowfully missed by everyone”.

On Friday evening, before the bodies were found, Deirdre Morley, the children’s mother, was found in a disorientated state near her home.

She was taken to Tallaght Hospital and was treated there until Tuesday evening, when she was arrested by gardaí and taken to Clondalkin Garda station.

On Thursday, Ms McGinley was charged with three counts of murder and is due to reappear at Dublin District Court on Wednesday, February 5th.

Earlier this week, the children’s father, Andrew McGinley, released a statement via the Garda saying the three siblings had “beautiful, bright futures” ahead of them and since their deaths “every breath is a struggle”.

“Conor, Darragh and Carla are adored. They all had beautiful, bright futures ahead of them with family, friends and a community who love them.

“To all parents, cuddle your children whenever you get a chance, tell them how much you love them as often as you can, spend every spare minute with them reading, playing and enjoying their wonderfulness.

“The future has now become our enemy but we will battle it every day to keep the memory of Conor, Darragh and Carla alive.”

Sports club Rathcoole FC is offering the community counselling services because of the family’s close connection with the club.

Conor played for the under-10s team and Darragh was about to start with the under-8s after going through the club’s kids’ soccer academy.

A vigil was organised earlier this week and a GoFundMe page set up by neighbours had raised almost €25,000 by Friday morning.