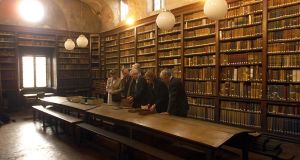 The library at the the Irish College in Paris, pictured in 2000. Photograph: Eric Luke

A row over sending 20 young Irish people on work experience to assist with the refurbishment of the Irish College in Paris spanned more than two years, with appeals made to both Garret FitzGerald and Charles Haughey to help smooth the project.

A departmental official’s note to minister for finance John Bruton on March 2nd 1987 said the proposal that the government should refurbish the Irish college in Paris, which was the property of the French state and was then occupied by a Polish seminary and school, first arose in January 1986.

The official said they could “only assume” that the full cost would have to include Anco’s “basic unit cost” which was about £8,000 per man year of training. This would put the full cost at about £170,000, at least.

“This money would in effect be lost to the Irish economy: not only would it probably all be spent in France, it would be spent on a building which is not owned by the Irish Government and on a project whose purpose is to say the least ill-defined – all we know is that a centre would be established to provide the Irish in Paris with a cultural and social base. From every point of view there may be more benefit from spending these funds in Ireland. ”

The official said that in the end it was “the vagueness of the whole proposal which provides the most doubts”.

Chairman of the Friends Committee of the College des Irlandais, Frank O’Reilly, wrote to taoiseach Garret FitzGerald on March 4th saying he was “surprised and distressed” to learn of the complete and unexpected change in a previous decision to fund the project.

Even though minister for finance John Bruton had written to minister for foreign affairs Peter Barry only the day before seeking further information on the “vague” project, the files reveal a letter signed by taoiseach Garret FitzGerald to Mr O’Reilly on March 6th indicating the government had approved the expenditure for the Anco participation in the project.

FitzGerald said this did not imply any commitment to expenditure in future years.

Ultimately, the International Fund for Ireland approved an allocation of £100,000 for the work-experience project, but the full funding proposal still had not gone to the board of the then Fás training body by June 1988.

Mr O’Reilly wrote to The Irish Times in June 2001 criticising a report of a “protracted and bitter” struggle for control of the Irish College.

He said that “with the exception of one generous grant of £150,000 made some years ago through the good offices of the then Minister for Foreign Affairs, the late Mr Brian Lenihan, no major financial aid has been forthcoming.

“From the outset, the board has consistently requested the Government to assist the college financially and to restore it to its former prominence. Now it has made a commitment of £7 million for its redevelopment, which we welcome most heartily.”

In the end, the government spent €14.5 million restoring the building allowing the Centre Culturel Irlandais to open there in 2002.