From the Lagan to the Lee: Northern rowers set to take part in Cork race 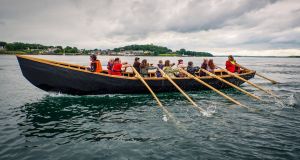 Belfast vessel Mamach Mór is just one of over 200 boats participating in this year’s Ocean to City event. Photograph: Explore Home Photography

A Belfast group is travelling from the Lagan to the Lee this weekend to participate in the Ocean to City Race from Crosshaven at the mouth of Cork Harbour up to the city quays.

Lagan Currachs was founded in 2016 and its chair Kylah Dittmar explained the inspiration for the club came when one of the founder members, Niamh Scullion, was involved in rowing another currach, Colmcille, across the Irish Sea from Iona in the Inner Hebrides to Rathlin Island in 2012.

“We are a group of people from across Belfast who came together to build a 10m currach for use on the River Lagan by community groups, tourists and members of the public - it took us nine months - from March until December 2016 - to build the boat,” said Kylah.

“We launched our currach into the River Lagan at Ravenhill Reach slipway on January 29th, 2017 and named her Mamach Mór which means ‘big mammal’ because we spent so long working on the currach, she became like a living creature to us - a whale.”

Tim Bloomer was also a founder member of Lagan Curraghs and he will be one of 12 rowers crewing the boat when she takes part in the Cork race on Saturday and he said he was looking forward to the challenge of rowing the 28kms course in Cork Harbour.

“Our curragh is out almost every weekend - we operate from near the Big Fish [a sculpture] on Donegall Quay so we have people rowing down the Lagan and last week we took her up to Ballycastle to row to Rathlin [Island]which is about seven miles and you can have a strong swell up there,” he said

“But this is our first time bringing the boat to Cork so we won’t know what the water is like till we get there but we’re looking forward to it. There’s a great camaraderie on a big boat with so many rowers, so I think we will just enjoy the day and finish the race rather than trying to set any time.”

Mamach Mor is just one of over 200 boats participating in this year’s Ocean to City event with a record number of more than 600 participants from Ireland, the UK, the Netherlands, Germany, Spain and the US taking part, according to Clare O’Sullivan of organisers, Meitheal Mara.

“Our furthest travelled crew will be from Albany, the capital of New York State. Members of the Albany Irish Rowing Club will be borrowing an Irish boat for the race from Jimmy Austin, a member of Cork city’s Naomhóga Chorcaí,” she said.

Ms O’Sullivan revealed that this year’s participants also include Alan MacNamidhe, who was introduced to currach rowing two years through Naomhóga Chorcaí and is striving to become the first blind crew member to finish the full race course of Ocean to City.

“Alan started training for Ocean to City six months ago when the possibility of taking part in An Ras Mor came up in conversation and he’s teaming up with Jack O ‘Keeffe, Ed O’Leary, John Tynan and Michael McLaughlin in a four-hand working naomhóg [a traditional rowing boat] to compete on Saturday,” she said.

Ocean to City - An Ras Mor, now in its 14th year, is part of Cork Harbour Festival which is organised by Meitheal Mara and which features over 70 events. This year’s event runs from June 2nd until June 10th and the full festival programme is available online www.corkharbourfestival.com.