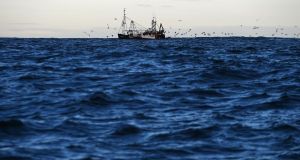 The Irish Naval Service has detained a French-registered vessel off the southwest coast on Sunday. Photograph: Andy Buchanan/Getty/AFP

The Irish Naval Service has detained a French-registered vessel off the southwest coast on Sunday for an alleged breach of fishing regulations.

The trawler is being escorted by the LE George Bernard Shaw to Castletownbere in West Cork where she is expected to arrive at midday on Monday.

It’s expected that the Irish authorities will make an application for a 48 hour detention order at a special court sitting in West Cork on Monday or Tuesday.

The 32-metre long Miss Jacqueline is Spanish owned and fishes out of La Coruna in Northern Spain even though she is registered in Bayonne in France.

The vessel was built in St Malo in Brittany in 1962 but was bought by Spanish owners in 1997, who converted her for use as a long liner to fish for hake.

According to the Defence Forces Press Office, today’s detention of the French registered trawler is the fourth such detention by the Naval Service this year.

The detention comes as the European Commission expressed “deep concern” about Ireland’s ability to monitor fishing activity during the Covid-19 pandemic.

According to a report in The Sunday Times, Bernhard Friess, Acting director-general of the EU Maritime Directorate, has written to Ireland about the issue.

Mr Friess has questioned how Ireland can meet its legal obligation to control and check landings of fish if physical inspections have to be reduced.

Inspectors with the Sea Fisheries Protection Authority (SFPA) stopped checking landings in some ports after the Covid-19 guidelines were introduced in March.

Some inspectors now fear the Department of the Marine will use the EU letter to pressure them into resuming inspections in wheelhouses and holds.

Mr Friess said the EC “recognises the challenges presented” by Covid-19 but expects member states’ competent authorities to adapt to the new situation.

He said the Commission expects member states “to introduce the necessary measures and resources to ensure control, inspection and enforcement.”

“We note the Irish authority intends to continue administrative tasks, cross-checks and vessel monitoring as usual,” said Mr Friess in his letter.

But he cautioned the Dept of Agriculture, Food and Marine that while such checks were important “they do not serve as a substitute for physical controls”.