Danny Kinahan, an ex-British army officer, ‘honoured and proud’ to take up the role 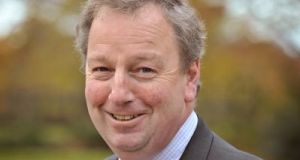 Veteran’s Commissioner Danny Kinahan: previously served as MLA for South Antrim and was the MP for the area between 2015 and 2017.

His appointment was announced by the North’s Secretary of State, Brandon Lewis, on Thursday.

Mr Kinahan, a former British army officer, said he was “honoured and proud” to take up the role.

The UK government had committed to creating the post as part of the New Decade, New Approach agreement which restored the Stormont Assembly in January.

The commissioner’s role is to “act as an independent point of contact to support and enhance outcomes for veterans in Northern Ireland. ”

Mr Kinahan’s appointment will last for three years, on a salary of £306 per day plus expenses, with an expected commitment of 110 days per year. He is currently a councillor on Antrim and Newtownabbey Borough Council, but will stand down from politics before taking up the appointment.

He previously served as MLA for South Antrim and was the MP for the area between 2015 and 2017.

He is also the coordinator and co-creator of the Westminster Northern Ireland Veterans’ Support Group and is Deputy Lieutenant for Co Antrim.

The North’s first minister, Arlene Foster, welcomed Mr Kinahan’s appointment, describing it as a “positive but long overdue step towards ensuring the needs of Northern Ireland’s large and vibrant demographic of armed forces veterans are practically understood and addressed.”

The DUP leader said his key focus “must be the full implementation of, including a statutory duty to comply with, the Armed Forces Covenant in Northern Ireland.”

“Local veterans should not be at a disadvantage compared to their colleagues elsewhere in the UK, or indeed other citizens, in accessing a range of important services,” Ms Foster said.

UUP leader Steve Aiken said Mr Kinahan had been “steadfast throughout his long political career in fighting to see that our military personnel and their families are given the full recognition that they need and deserve”.

Mr Aiken said he would be a “first-rate advocate for the many thousands here who have served.”

The UK government’s covenant - which supports veterans, personnel and their families and entitles them to some priority treatment - applies in England, Scotland and Wales but only in some council areas in the North.

It is opposed by Sinn Féin and the SDLP, who argue that military veterans should not be given preferential treatment over other groups.