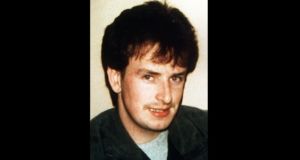 Aidan McAnespie had been on his way to Aghaloo GAA grounds to watch a football match when he was killed.

A former British soldier is to stand trial for the manslaughter of a 23-year-old man in Co Tyrone more than 30 years ago.

Aidan McAnespie was shot dead in Aughnacloy as he walked through a British army checkpoint on his way to Aghaloo GAA grounds to watch a football match.

The judge at Dungannon Magistrates’ Court ruled that there was sufficient evidence for 50-year-old David Jonathon Holden, whose address was given as care of his lawyer’s Belfast offices, to go on trial for the unlawful killing of Mr McAnespie on February 21st, 1988.

Mr Holden, a former Grenadier Guardsman who now lives in England, was released on bail of £500 and will appear in court again next month.

The decision was welcomed by the Sinn Féin MP Michelle Gildernew, who said it was “a step forward for the family in the campaign for the truth of what happened to Aidan”.

She said the case also highlighted “the need for the legacy mechanisms agreed in the Stormont House Agreement to be implemented in full so all families bereaved by the conflict can get access to truth,” she said.