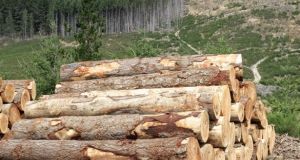 “The urgency and gravity of our industry’s situation cannot be overstated; we are on the brink,” a letter to the Taoiseach said. Photograph: Getty Images

The forestry industry in Ireland is in a “full-scale crisis”, with 12,000 jobs in rural Ireland under threat, a lobbying group for the sector has told the Taoiseach.

In a letter sent to Micheál Martin last week, Forestry Industry Ireland (FII) warned that the industry is “on its knees due to prolonged and ongoing inaction” within the Department of Agriculture, Fisheries and the Marine.

The lobby group, as well as semi-State Coillte, has been urgently raising concerns about the impact of a backlog in the appeals process for felling licences, which it says is endangering the future of the industry, despite a recent amendment to the law governing the process.

The industry has argued that the department’s Forestry Appeals Committee is failing to deal quickly enough with appeals against forestry licences, which in turn is holding up tree harvesting and timber production.

It is understood that there has been an increase in felling licences approved in recent weeks, but that the number is still well below the volume required to ease the logjam, which could take as long as 12 months to clear.

The letter to Mr Martin states: “We are imploring you to intervene to save these jobs and to salvage a vital industry which supports rural Ireland and contributes substantially to meeting Ireland’s climate targets.

“The Department of Agriculture has repeatedly failed to deliver on commitments to produce the required number of forestry licences. It has not met any of its own targets and has repeatedly refused to admit that its process is not delivering,” the group warned.

The forestry sector is asking that Mr Martin, alongside Fine Gael leader Leo Varadkar and Green Party leader Eamon Ryan, place the forestry division of the department on an “emergency footing” and redeploy personnel to deal with the backlog in the system, and asking that new targets be set for licensing. It also wants a “temporary emergency oversight unit” based in the Department of the Taoiseach to “hold the Department of Agriculture to account”.

“If you do not personally intervene to solve this crisis, Ireland’s sawmills and forestry companies will be forced to close, rural jobs will be lost, and no farmer will want to plant forestry in the future.” The letter, signed by FII director Mark McAuley concludes: “The urgency and gravity of our industry’s situation cannot be overstated; we are on the brink.”

In a statement, the department said it is “aware of the issues in forestry licences and the impact this is having, especially on the sawmilling sector”. It has developed a project plan and has invested in extra resources, and is recruiting additional forestry inspectors. It said the highest number of licences were issued in October and November since the year began, and that it continues to invest in new resources in response to the issue.