The scene at seaside town Youghal which alongside Cork city experienced flooding overnight. A Met Éireann warning for Cork came into force at 6am on Sunday with the forecaster predicting 40-70mm of rain. Video: Patrick Buttimer & Lara C. 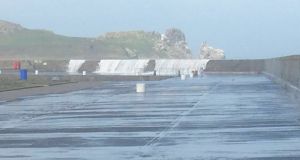 Waves coming over the pier in Howth on Sunday. Photograph: Howth Coast Guard

There was surface water flooding in many of the low-lying areas of Cork city centre adjacent to the River Lee on Sunday morning after high tides, heavy rain and strong winds.

A Met Éireann status orange rainfall warning for most Cork came into force at 6am on Sunday with the forecaster predicting 40-70mm of rain. The warning lasts until Monday morning. A yellow level wind warning is also in place for most of Munster, Wexford, Galway and Mayo

A status yellow rainfall warning and a has been issued for Kerry, Limerick, Tipperary and Waterford .

High tide on the River Lee at 8.25am on Sunday combined with a strong south easterly wind which prevented water exiting into Cork Harbour and led to quays being flooded around the city centre.

Custom Quay, Union Quay, George’s Quay and Wandesford Quay on the south channel of the River Lee were all flooded as the high tide pushed water over the quay walls onto the roadway.

There was also some flooding on the South Mall and in Oliver Plunkett Street as well as at on the Lower Glanmire Road below Kent Railway Station, north of the Lee, again due to high tides.

Meanwhile in Dublin Howth Coast Guard has urged walkers to avoid the east pier because of waves breaking over the pier with a risk of people being washed into the water.

It said there were reports coming in of other coastal areas being exposed to waves breaking endangering the public. “Please use common sense and take care during current weather condition, it said on a Facebook post.

In Waterfordthere is excess surface water on the Ballymccabry to Dungarvan Road, acccording to AA Roadwatch.

Cork County Council said it has emergency crews on full alert in many coastal towns as it confirmed that there had been some flooding in Youghal from Brown Street to O’Rahilly Street while there was also some flooding of property on Back Street in the town.

According to the council, its severe assessment team has met to monitor the situation including in Midleton where there was flooding on Bailick Road and at Bonnog while minor flooded on Lower Main Street receded after the tide turned.

“The Council Yard on Hospital Road in Midleton remains open today for the collection of sandbags and crews will be deployed again later for the evening high tide,” said the council in a statement as it advisded motorists to exercise caution especially in coastal areas.

There was some tidal flooding in the Carrigaline/Crosshaven area while in Kinsale, flooding occurred on Short Quay, Pier Road and Worlds End where council crews are currently clearing seaweed and fish boxes from the roadway.

According to the council there were no reports of major flooding in Bandon which was badly hit in December and, while there was flooding on Bridge Street, Ring Road and Inchidoney Road in Clonakilty, Skibbereen, Dunmanway and Bantry all escaped the worst of the severe weather.

Meanwhile in north Cork there were reports of snow falling on higher ground with snowfalls in Millstreet, Kiskeam, Banteer and Bweeng.

There were bitterly cold conditions Saturday night after low temperatures of minus two degrees were forecast.

The northern half of the country will be mainly dry on Sunday with rain localised in the south.

But the good news is Met Éireann is predicting milder weather will return next week.

Monday is expected to be “breezy” with showers and outbreaks of rain, which will be heavy in places.

“Normal” temperatures for April, which are between 9 to 12 degrees, are expected to return next week.

Mr Murphy said the “variable” temperatures were not unusual for this month.

In March, Met Éireann’s monthly weather statistics showed nearly half of all stations experienced dry spells with almost all recording below average rainfall for the month.

The mean air temperatures for the month were described as being below average across much of the country with some exceptions in the north and west.

There was one named storm for Ireland last month; Storm Jake brought gusts of 133 km/hr to Mace Head in Galway.