Morning briefing: another Garda crisis, a whiff of blue blood and a controversial flag 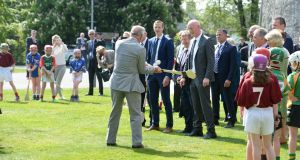 1. Another morning another deepening of the Garda crisis

The crisis engulfing Garda Commissioner Nóirín O’Sullivan deepened yesterday when it emerged that she delayed informing the Garda’s internal audit unit of financial irregularities at the Templemore Garda College after being instructed to do so by the Department of Justice.

2. The old Central Bank building won’t be protected after all

Dublin City Council has shelved plans to add the former Central Bank on Dame Street to the Record of Protected Structures to facilitate its new owners’ development scheme.

3. Irish Eurovision hopes go up, up and away as Murray fails to make final

Brendan Murray’s balloon has deflated. The Irish man sadly failed to make the final of the 62nd Eurovision song contest with ‘Dying to Try’.

Before the voting finished, he had said, “whatever happens, I will always remember this.”

4. The Palestinian flag is flying from Dublin’s city hall

The Palestinian flag was erected on the roof of Dublin City Hall on Dame Street on Tuesday. People Before Profit councillor John Lyons proposed the motion to mark 50 years of Israeli occupation in the West Bank and to show the support of the international community for the Palestinian people. Former Minister for Justice Alan Shatter has said the flying of the Palestinian flag by Dublin City Council will do profound damage to the reputation of “our capital city and our country”.

The visit by the British Royals continues on Friday. Miriam Lord was with them yesterday and observes: “In the brief battle for the attention of five sporting superstars, it came down to a straight fight between the Duchess of Cornwall and a bucket of carrots. The carrots won hooves down.”

1 Coronavirus: Government to extend restrictions for at least two weeks
2 Chief medical officer urges people not to visit hardware stores
3 Growing hope in Government of partial easing of restrictions after May bank holiday
4 Coronavirus: More ‘striking’ evidence BCG vaccine might protect against Covid-19
5 Coronavirus: Ireland will have to ‘live alongside the virus’
Real news has value SUBSCRIBE