Morning briefing: Surging rents, bees in the post, plans for the Abbey theatre and more 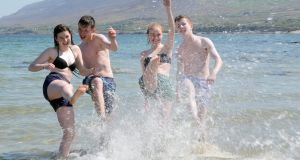 It’s been scorching around the country and the good weather is set to continue this week. From left, Sophie, Mark, Orla and Mark are cooling off at Old head in Co Mayo on Monday. Photograph: Paul Mealey

The average cost of renting a home in the Republic has increased by €134 a month over the last year, with prices in Dublin climbing by substantially more, a new report on the housing market finds.

Figures published by property website Daft.ie show that the average monthly rent in the Republic is at €1,131, with rents averaging €1,784 on the south side of Dublin city, €1,690 in the city centre and €1,553 north of the Liffey.

2. The Palestinian flag is to fly above city hall but the Israeli ambassador is raging

Dublin City Council has agreed to fly the Palestinian flag above City Hall this month despite opposition to the move from the Israeli ambassador to Ireland.

People Before Profit councillor John Lyons said he proposed the motion in solidarity with the people of Palestine to mark 50 years of Israeli occupation in the West Bank and to show the support of the international community for the Palestinian people.

The Abbey Theatre is planning a multimillion euro redevelopment and expansion. The plan includes increasing the theatre’s capacity from 631 to 950 seats.

The plans will see the demolition of the existing theatre and several surrounding properties recently acquired by the Abbey.

4. The pub - where Irish life starts and ends

Romance begins at the pub, according to a survey by the Irish Vintners’ Association, which found more than half of respondents had a first date there.

The pub is also still at the centre of family events, the survey found. Almost 90 per cent of more than 1,500 people said they attended after-funeral drinks in a pub, while more than 80 per cent went to one after a christening.

5. Alligator heads and thousands of live bees among items seized by Customs

A package containing up to 4,000 live bees sent from Poland and a consignment of eight alligator heads were among the items seized by Customs officials at An Post’s Portlaoise mail centre last year.

With Wow Air and Norwegian in the market stateside travel has never been so cheap - or has it? asks Fiona Reddan