Work on plaza will not begin until after trams start 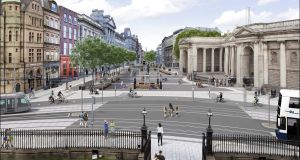 Plans for the College Green Plaza will be submitted to An Bord Pleanála in March.

The designs for the new College Green plaza look quite nice. There are plenty of trees, a reasonable amount of seating, and those multiple water jet fountains children who live in warmer countries like to play in.

The architects, Dixon Jones/Paul Keogh Architects, have come up with what is probably the best solution to the potential between cyclists and pedestrians.

The centre of the plaza will be given over entirely to pedestrians, with cyclists using a two-way track on in front of Trinity and on the opposite side of the plaza to the Bank of Ireland.

With 1,000 cyclists passing through College Green at rush hour, there will the temptation to take a diagonal line, but the centre of the plaza has been designed with cycling-unfriendly granite setts – cobblestones – to discourage this practice.

The only apparent problem is the council is showing designs and photomontages, when we should be looking at the real thing in situ.

Plans to pedestrianise College Green have been doing the rounds for years, but every time Dublin City Council or Government transport authorities put forward proposals, they lose their nerve in the face of businesses and motoring lobby interests.

Ten years ago, the now defunct Dublin Transportation Office proposed making the area from Dame Street to O’Connell Street public transport only. It was described as “wild” by the AA’s Conor Faughnan who quipped “eventually the DTO will produce its plan to pedestrianise Leinster”.

In early 2009, when the College Green “bus gate” was announced, it was billed as a car-free zone, needed to facilitate the new Luas line. By the time it was introduced later that year, it had been watered down to a 7am-10am and 4pm-7pm week-day ban. Only in mid-2014, when the heavy duty phase of the Luas work began, was the ban extended to 7am-7pm on week days.

In September 2015, then executive manger of the council’s traffic department Declan Wallace said the College Green traffic changes need to be agreed “urgently” to be in place ahead of the start of operations of the Luas.

The following April the council said it expected the plaza to be in place by June of this year. Last October, following public consultation where businesses again voiced their opposition, the council announced it would submit the plan to Bord Pleanála this March.

The earliest the plaza will now be in place will be 2019, and the only reason College Green will finally be closed to traffic is that the council’s hand has been forced by the Luas.

It’s almost five years since the Luas got permission, and two years since construction started, a time within which the plaza could have been planned and built.

Instead, the College Green will remain a construction site for another 18 months after trams start running.