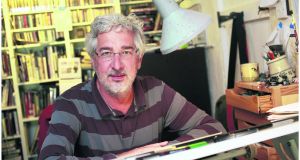 Cartoonist Martyn Turner: deprived of a shot at martyrdom for a divorce cartoon in 1995. Photograph: Brenda Fitzsimons

The phone rang. It happens.

“You are being sued for blasphemy.”

“I have to ask you,” said The Irish Times, “would you like to be represented by our counsel or will you hire your own?”

Hmmmm. Tough decision. Let me think about that for half a nanosecond. Do you want me to bankrupt myself because someone thinks I’ve been a naughty boy or do I want to let you pick up the tab?

Wendy Shea, who drew illustrations for the Sunday Independent, was also being hauled before the beak on the same charge. I am uncertain of the details of her crime. *

My crime was to draw a cartoon about the divorce referendum. The Labour Party had chosen Mervyn Taylor to lead the campaign on behalf of those devils seeking divorce. Mr Taylor is, culturally, Jewish.

Some right-thinking (extreme-right-thinking) anti-divorce enthusiasts questioned whether someone of that ilk was an appropriate sort to be interfering with our sacred Catholic Constitution.

I drew a tasteful cartoon, in silhouette, of Jesus on the cross saying “Don’t ask me about divorce, I’m Jewish”.

There was a howl of righteous indignation for this calumny somewhere in Dublin and that led to the phone call.

What I was thinking about when I thought of the cartoon was, well, obviously, the divorce referendum and whether Mervyn Taylor was entitled to an opinion on same.

But that is the law for you. They always want you to state the obvious.

Eventually my day in court arrived. I spent a pleasant 40 minutes chatting to junior counsel (£400 an hour) on whether the Eagles, who were in town, were better collectively than as individual performers (I went for the latter, she went for the former).

I then went into conference, as we defendants say, with senior counsel (£4 million an hour) who started to run me through what would happen.

“Well it is,” I said, “I don’t really do Christianity or Islam, or Judaism – all the Abrahamic religions, truth be told. And I don’t know enough about the far eastern religions. But, when I studied anthropology, I did develop a taste for the cargo cultists of the Trobriand islanders, as their beliefs seem to be based on some sort of reality.”

“This is awkward,” he said. “You seem to have sworn your affidavit.”

“And were you married in a church?”

“So how did you get round the religious thing then?” he said.

“Fine,” he said. “Swear on the Bible and keep your fingers crossed”.

“So how long was it that you were attorney general?” I asked. (He was, really, he was.)

We waited to be summoned. And waited, and waited, with the lawyers meter ticking away at £4 zillion an hour.

Eventually, just around lunchtime we were told to go home. They had discovered that while there was a crime of blasphemy, there was no definition in law of what blasphemy actually was.

I was off the hook.

No chokey for me. No press freedom awards, no one writing to the paper beseeching that I be let out. But then there might not have been any of those anyway.

Dermot Ahern introduced a blasphemy law a few years after this debacle. I heard him on the radio yesterday. He claimed that his law is so written that no one will ever be prosecuted under it.

He said it was preferable to holding a referendum to excise blasphemy from de Valera’s Constitution, as the debate “would have brought out nut cases on both sides of the argument and that wasn’t the time for such stuff”.

Now, hang on there. Down through the ages there have been some seriously wobbly religious folk, of many, many different persuasions who have done some awful things and said some terrible things in the name of their religions.

Although there have been some atheistic swine causing mayhem over the centuries, they have rarely, if ever, done it in the name of atheism. I mean, Hitler, like me, was a vegetarian, but he did what he did because he was a totalitarian fascist dictator.

I took offence at what Ahern said. It struck to the heart of my total lack of belief system.

It might be, and here I reach for the telephone number of my local Garda station, almost considered blasphemy – which is, God help us, still an offence.

* This article was edited on May 9th, 2017. In an earlier version of this article it was stated in error that the cartoonist Wendy Shea had died.