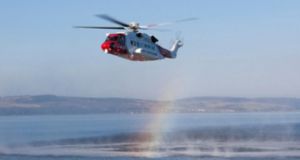 A British Coastguard helicopter from Stornoway airlifted two of the crew to a sister Aran island vessel, the Star of Hope, and the other three crew members were taken to hospital

Five crew members from an Aran island fishing vessel were rescued after the twin-rig trawler began taking water and sank off the Scottish coast.

The 23m Iuda Naofa owned by Mairtín “20” Ó Conghaíle of Inis Mór signalled that it was in distress on Tuesday morning after it began taking water about 48 miles north of the Butt of Lewis.

A British Coastguard rescue helicopter from Stornoway was sent to the scene and dropped a salvage pump onto the vessel to try and control the situation. But the boat became swamped and started to sink.

Two of the crew were airlifted to a sister Aran island vessel, the Star of Hope, which was nearby, and the other three crew members were taken by helicopter to the Western Isles Hospital in Stornoway on the Isle of Lewis where they are being treated for mild hypothermia.

Mr Tunstall said that “evacuating the five crew swiftly and safely before the vessel went down was a great achievement”.