First Dáil could be template for Scottish independence, says MP 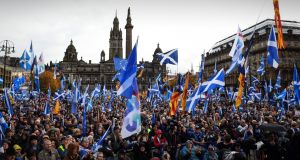 Scotland could follow the example of the first Dáil a century ago and withdraw from the Westminster parliament if another independence referendum is not granted, a senior Scottish National Party MP has suggested.

Joanna Cherry, the party’s spokesman on justice in Westminster and a Queen’s Counsel (QC), said the example of the 73 Sinn Féin MPs elected in the 1918 British general election provided a way forward.

Instead of taking their seats at Westminster, the elected Sinn Féin MPs conveyed the first Dáil on January 21st, 1919 and declared an independent Irish state.

The SNP is heading for a major constitutional showdown with Boris Johnson’s Westminster government if the party wins a majority in the Scottish Assembly elections in May.

The party has vowed to stage a second referendum if it wins a majority of seats, but will need the permission of Westminster to do so.

Mr Johnson has said that he will not grant Scotland a second referendum given that the first one was rejected only seven years ago in 2014.

He said a referendum was a “once in a generation” event and suggested the 41 year gap between the 1975 and 2016 European referendums was a more appropriate timeframe.

The SNP has argued that Brexit has changed the context for a referendum especially as the Scottish people voted 62 per cent to 38 per cent to stay in the EU.

Writing in the pro-independence National newspaper, Ms Cherry said the ideal would a referendum based on a Section 30 order as granted by Westminster.

However, she said it would be a “no-brainer” for the SNP not to consider alternative options.

She suggested the experience of Ireland a century ago could be replicated with Scottish MPs simply withdrawing from Westminster and declaring an independent Scottish state.

She stressed that the SNP was not seeking to replicate the Irish War of Independence of 1919 and 1921 and that independence would be achieved by exclusively by peaceful means.

“One hundred years ago, Irish independence came about not as a result of a referendum but as a result of a treaty negotiated between Irish parliamentarians and the British Government after nationalist MPs had won the majority of Irish seats in the 1918 general election and withdrawn to form a provisional government in Dublin,” she wrote.

“While no-one wants to replicate the violence that preceded those negotiations, the (Anglo-Irish) Treaty is in legal and constitutional terms a clear precedent which shows that a constituent part of the UK can leave and become independent by a process of negotiation after a majority of pro-independence MPs win an election in that constituent part.”

The SNP will debate alternative strategies for independence in a national assembly later this month on January 24th in which the “Irish option” may be on the table.

Ms Cherry continued: “ It is short-sighted to view the question of how we might lawfully end a consensual union of two sovereign nations which is more than 300 years old only through the prism of devolution which has been with us for barely two decades and is not the last word on the constitutional relationship between Scotland and England. ”

She concluded by stating that Scottish first minister Nicola Sturgeon had stressed the need for an alternative strategy if a second referendum is not granted.