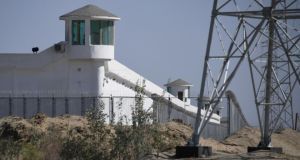 A high-security facility near what is believed to be a re-education camp where mostly Muslim ethnic minorities are detained, on the outskirts of Hotan, in China’s northwestern Xinjiang region. File photograph: Greg Baker/AFP via Getty

Ireland should take a lead role in raising the Chinese government’s campaign of “genocide” against the Uighur people when it takes its seat on the UN Security Council in January, the chairman of the executive committee of the Uighur World Congress has said.

Addressing a webinar organised by Senator Rónán Mullen, Omer Kanat called on Ireland to use its position on the Security Council to help his people, and referenced the Nazi extermination campaign against the Jews.

“The world said never again, but never again is happening now in China and no-one can claim they don’t know,” he said.

Asked what Ireland could do to help the mostly-Muslim ethnic group of ten to twelve million people, he said: “Don’t let the Uighur people disappear from the earth.”

The webinar heard that a recent white paper by the Beijing government said that every year 1.29 million ethnic people are being put through camps described by the Chinese authorities as “vocational education” centres.

There have been repeated reports of “graduates” from the camps being forced to take up labouring work in factories, in a region, Xinjiang, that produces half of the world’s cotton.

“Survivors [ of the camps ] have told us they are tortured, starved, raped, forbidden from speaking their language, subjected to forced sterilisation, and to near constant political indoctrination,” Mr Kanat said.

“They are forced to say, over and over again, my soul is infected with a disease, and, I don’t believe in god, I believe in the Communist Party.”

Children being taken into state orphanages where they are forbidden to speak Uighur, he said.

“Probably they will be separated [from their families] forever. Even if the camps are closed, we can never trace these children if they have lost all memories of their families.”

Up to one million ethnic Han Communist Party members had been sent into Uighur homes to spy on families. “There is emerging evidence of sexual abuses in these situations.”

Addressing what Ireland could do, Mr Kanat said the Uighur Congress strongly endorsed the comment in The Irish Times in August by Irish academic, David O’Brien, who said it was time for the UN Security Council to act.

“I would like to ask Ireland to take the lead in organising support for a UN Security Council agenda item to propose a commission of inquiry.”

Ireland should mobilise support for a resolution on atrocity crimes against Uighur. “Everyone should be shocked that such a resolution has not even been proposed so far.”

Ireland should also support EU sanctions against Chinese officials and companies aiding surveillance and forced labour in Xinjiang, and ban government procurement from Chinese companies involved in the surveillance operation.

Asked about the issue, he said that Irish universities that entered into partnerships with Chinese ones, without raising the Uighur issue, were “complicit” in what academics have described as genocide.

Mr O’Brien, who lectures in Asian studies in Germany, said that during a recent debate in the Seanad on the Uighur issue, Minister of State Colm Brophy had given over most of his speech to the importance of Ireland’s trade links with China.

History will judge China for one of the most startling human rights abuses of modern times, he said, but it will also judge Ireland’s response.

Rian Thum, a lecturer in the University of Nottingham and author of a book on Uighur history, said the only way a business sourcing material from China could be sure a product was not linked to forced labour, would be to “extricate your supply chain from China entirely.”