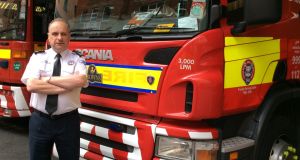 Chief fire officer: “Our buildings are much lower in height than anything you would have in the UK, so the risks are much lower anyway, but this is an opportunity to find out,” Patrick Fleming said

Dublin’s chief fire officer, Patrick Fleming, has described the Grenfell Tower fire, which claimed the lives of at least 79 people in west London, as a “game changer” for everybody working in fire prevention.

As the British government orders tests on 600 high-rise council flats across England, to see if they used the same combustible external cladding as on the 24-storey Grenfell building, Mr Fleming is conducting an “informal survey” of residential buildings more than six storeys high to find out whether they have similar issues.

“The initial results would indicate that the number is very, very small – at most a handful,” Mr Fleming said in his office at Dublin Fire Brigade headquarters. He declined to name the properties.

The inspections are all the more urgent since UK police said on Friday that the Grenfell blaze spread rapidly from a fire in a fridge-freezer and that external cladding tiles checked afterwards failed fire-safety tests.

Mr Fleming expects the bulk of his survey, which he says is “a visual, external inspection”, to be completed by the middle of next week. All of the buildings received safety certification where the external cladding satisfied fire standards, but he wants to make sure that they used brick or stone cladding instead of the type of flammable material that was installed in the refurbishment of Grenfell Tower last year.

The cladding product Reynobond PE, a combustible aluminium composite material manufactured by the US company Arconic, was used in the London tower. The suspicion is that the fire spread so quickly because the gap between the cladding – usually up to 50mm – acted like a chimney, helping to funnel the flames up the building.

The product is very unlikely to have been used in Irish buildings, according to Mr Fleming, who has a staff of almost 1,000 at 14 fire stations. “Our buildings are much lower in height than anything you would have in the UK, so the risks are much lower anyway, but this is an opportunity to find out.”

Once any buildings of concern are identified, he will direct the properties’ management companies to consult fire-safety experts to determine what type of cladding was used, whether it meets fire-safety standards and whether it was installed properly.

Mr Fleming says that fire-detection and -alarm systems are better in Ireland than in the UK, as alarms in individual apartments and communal areas are linked. Grenfell residents claimed there was no central fire-alarm system, and some said they learned of the fire only when they heard the sirens of emergency vehicles.

The number of residential blocks brought to the brigade’s attention is ‘very, very small’ compared with the number of buildings constructed during the boom

Mr Fleming says the number of multistorey residential buildings brought to Dublin Fire Brigade’s attention is “very, very small” compared with the number of buildings constructed during the boom years. “The majority of the fire-safety notices that we serve are on old houses in multioccupation, not on big new, or relatively new, apartment blocks,” he said.

Experts who have inspected multistorey apartment blocks built during the Celtic Tiger era have expressed concern that building work was not properly checked during construction.

“I wouldn’t myself buy an apartment in Ireland,” the Maynooth-based fire-safety engineer Des Fortune, who has been inspecting and approving fire-safety structures for 21 years, said. He explained that he could not guarantee that the hallways of apartment blocks were built to the standard required to allow occupants to escape a burning building or to contain a fire in an apartment.

Changes introduced three years ago, under the Building Control (Amendment) Regulations – or BCAR rules – have led to more stringent oversight of construction work: fire-safety experts must sign off on building works as they take place. Previously, fire engineers would sign off only at the end of the work.

Ninety per cent of it you couldn’t see, so there is a huge hole in all these new buildings on what was checked

“Ninety per cent of it you couldn’t see, so on your visual inspection you are limited on what you can see. There is a huge hole in all these new buildings on what was checked,” he said.

The owners of Irish buildings are not legally required to regularly assess their fire risk, according to Mr Fortune, unlike in the UK. “You could have a building that is 20 years old that has never been checked for fire, and the only time it becomes an issue is if something happens or if it has been sold,” he said.

Mr Fleming said he cannot say if another apartment block might have fire-safety defects like those discovered at Longboat Quay, in the Dublin docklands, or Priory Hall, in Donaghmede. “All I can say is that once it comes to our attention we try to deal with it.”

The chief fire officer acknowledged that the official technical guidance that sets out fire-safety requirements for property developers, architects and builders was out of date. The last time the documentation, which is the responsibility of the Department of Housing, was changed was 1996, and that was for a minor revision. “It is a long time,” he said.