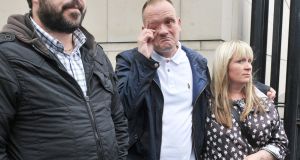 John Harbinson, a Protestant was murdered after being handcuffed and beaten in the loyalist Mount Vernon estate in north Belfast in May 1997. The killing originally was reported as a suspected “domestic incident” but it later transpired it was another murder by the UVF in north Belfast. It was after Gary Haggarty was charged in connection with the murder in 2009 that he offered to become an “assisting offender” or “supergrass”. It has been alleged that police Special Branch had high grade intelligence about those responsible for the murder but that they did not pass it on to the investigating officers.

Sean McParland was a 55-year-old Catholic father of four children shot dead in south Belfast in 1994. He was attacked in Skegoniel Avenue in the city on February 17th 1994 while baby-sitting his daughter’s four children. He died a week later. At his funeral in Lambeg near Lisburn the Bishop of Down and Connor Dr Patrick Walsh described the murder as “horrific and brutal” while local priest Fr Francis Furey said Mr McParland was a “good man who cared for his family and loved children”.

Eamon Fox (44) was a Catholic workman and a married father of six. An electrical contractor from Maghery in Co Armagh he was working with Gary Convie on a building site in the loyalist Tigers Bay area of north Belfast at the time of the shooting in May 1994. They were sitting in a Volkswagen estate car having their lunch when a UVF gunman opened fire with a Sten sub-machinegun. Mr Fox’s brother-in-law, who was in the back seat, escaped uninjured.

Gary Convie (24), a father of a young child, was shot dead in the same attack. From the Birches in Co Armagh he was a member of the Sean McDermott GAA club in Maghery. After the murders the UVF said the two men were known republicans. This was emphatically denied by their family and friends and the RUC. Police said the attack was “completely sectarian”.

Sean McDermott was a 37-year-old single Catholic shot dead by the UVF in Antrim on August 31st 1994, just hours before the IRA declared its ceasefire at midnight that night. From Belfast he was staying with a family in Antrim when a UVF gang burst into the house and abducted him. His body was found in a car at Tardree Forest near Antrim. He was shot twice in the head with a shotgun. Described as a quiet, decent, hard-working man he was due to be married the following month.