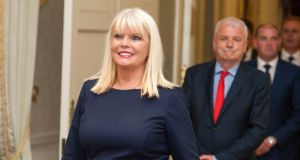 Mary Mitchell O’Connor said Ireland is placed 25th out of 28 in the EU in terms of women’s representation in the lower or single house of national parliaments. Photograph: Dave Meehan/The Irish Times

Minister of State Mary Mitchell O’Connor has accused Taoiseach Leo Varadkar of not “leading by example” on the issue of diversity in Government and failing to show real commitment to creating a gender balanced Dáil.

Mary Mitchell O’Connor was last week demoted to “super junior” Minister of State for Higher Education by the new Taoiseach, meaning she has a seat at the Cabinet table but does not have a vote.

“Today, WXN called on our new Taoiseach to get behind the diversity cause and to put government resources and commitment to it, and I am conscious that the government itself is not leading by example,” said Ms Mitchell O’Connor at Thursday’s event.

“I am just one of the seven women in a government team of 34 ministers, just over 10 per cent. Only 18 women have ever served as ministers since the foundation of this State.

“Ireland is the 76th place in the world tables of women’s representation in the lower or single house of national parliaments. That’s a fact. Ireland is placed 25th out of 28 in the EU.”

“The majority of countries with more than 30 per cent female representation in parliament have implemented quotas. In other words, waiting for political parties to see the light and to promote more women into the parliamentary ranks doesn’t work.

“The only thing that quotas have going for them is that they work. And as a result, the 2016 election saw 35 out of 158 women elected to Dáil Éireann, the highest number of women ever elected-that was 22 per cent.”

The accomplishments of 25 Irish women from across the arts, sports, entertainment, business and public sector sectors were celebrated at Thursday’s WXN awards.