Chief Gary Batton of the Choctaw Nation tribe from Oklahoma talks about the Native American tribe's contribution of $170 (€150) - the equivalent of about €4,000 today - to Irish famine relief in 1847. Pictures Cathal Noonan. Video: Simon Carswell 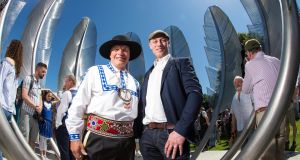 The Irish people and the Choctaw nation are bonded by the difficulties they have endured and the resilience they have shown, the chief of the Native American tribe told a gathering in Co Cork yesterday.

Gary Batton spoke about the similarities between the two people as a sculpture was unveiled at Bailick Park, in Midleton. Kindred Spirits, by Alex Pentek, commemorates a donation the Choctaw people sent to Ireland during the Famine.

Mr Batton said he became emotional when he saw the sculpture, a circle of giant stainless-steel feathers representing a bowl of food for the hungry, for the first time. “The people in Ireland know how to get a gathering together. It is hard for me to express what a great honour this is, this tribute to our Choctaw ancestors. I can’t tell you the feelings it gives to me to see it in person.

“We know the story of the tragedy of all our people that we endured and overcame. But once we heard of the story of hardship of the Irish people, we knew it was our time to step up and help out. We have endured, the Choctaw people and the people of Ireland.”

The mayor of Co Cork, Cllr Seamus McGrath, said the Irish were very grateful for the kindness of strangers during the Famine. “It is only right that we in Cork county would mark that and that there would be a lasting tribute to that act of human generosity. It was an extraordinary act of kindness.”

Almost 20 representatives of the Choctaw Nation of Oklahoma attended the ceremony, which included traditional Choctaw and Irish music and dancing.

Kindred Spirits was commissioned in 2013, by the former Midleton town council, to commemorate the time in 1847 when the Choctaw contributed $170 – about $4,400, or €3,800, today – to send food aid to Ireland. The Choctaw were themselves living in starvation and poverty, after being removed from their ancestral lands in a process that became known as the Choctaw Trail of Tears.

It is not the first time the Choctaw Nation has been honoured in Ireland. In 1990 Choctaw leaders travelled to Co Mayo to take part in a re-enactment of an 1848 protest. The gesture was returned in 1992, when Irish leaders took part in a trek from Oklahoma to Mississippi. The former Irish president Mary Robinson also has been named an honorary Choctaw chief.