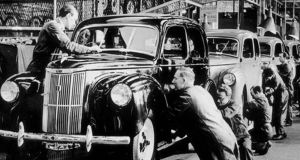 Ford cars come off the assembly line in Cork in the early 1950s.

The centenary of US inventor Henry Ford’s decision to set up a plant in Cork was commemorated last year – but now the stories of the workers who staffed the assembly line in the plant have been told in a documentary to be shown at this year’s Spirit of Mother Jones Festival on Leeside.

Fords - Memories of the Line, made by Emma Bowell and Eddie Noonan of Frameworks Films, tells what it was like to work on the assembly line at the Ford plant on the Marina in Cork, which at one point was the city’s largest employer before its closure in 1984 with the loss of 800 jobs.

“The impetus for the documentary came from Bill Daly, a former worker – Bill was a very keen photographer and took a lot of fantastic black and white photographs before the plant closed, but he had forgotten about them until someone began looking for photos for last year’s centenary.

“Bill recalled he had this collection and he realised he had something special on his hands and he wanted to do something to tell the story of the workers on the assembly line, because a lot of the centenary focused on Henry Ford setting up the plant – so Bill contacted us,” said Bowell.

The result is a 52-minute documentary telling what it was like to work on the Ford assembly line in Cork. Bowell and Noonan filmed interviews with several former employees, including Gus McLoughlin (94), who worked in Dagenham during the Blitz before returning to work in Cork.

Bowell added: “Some men found the monotony and repetition of working on the assembly line difficult to deal with, and they talk about that, while others put up with the monotony and just got on with it because of the benefits like good pay, and it was a very good job to have – it depended on your character.

“But we also look at the social aspect of the job and men talk about their memories of the comradeship and the craic and the banter and the slagging and discussions about hurling and soccer and the pints with colleagues at weekends, so hopefully it paints a fully rounded picture.”

Fords – Memories of the Line will be shown on Wednesday, August 1st, at the Firkin Crane as part of this year’s Spirit of Mother Jones Festival.