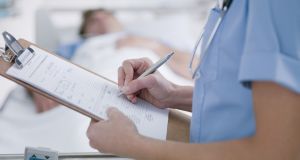 Nursing representatives also argue that pay rises are required both to encourage new graduates to join the public health system and to incentivise those already in post to stay there.

In the coming days the Public Service Pay Commission is expected to finalise the first element of its new report: an examination on whether the country’s health service is experiencing difficulties recruiting and retaining key medical and nursing staff.

The commission’s findings may not be published for a few weeks but unions and representative bodies are set to use any conclusion that recruitment and retention problems exist to press for improved pay.

In essence both nurses’ and doctors’ representatives argue that Ireland is competing largely in the English-speaking world for medical and nursing graduates and that the public health service in Ireland is losing out to other countries where remuneration packages are better.

Last month the Government agreed a €200 million settlement with medical consultants over its failure to pay increases under a contract negotiated in 2008.

However, this did not address the two-tier pay structure that opened up after the government of the day in autumn 2012 introduced a unilateral 30 per cent reduction in salary for all consultants appointed after that time. The pay cuts were partially reversed in late 2014, but medical organisations have argued that a significant gap remains .

They contend that the situation has actually been exacerbated by the recent settlement in that those appointed prior to the 2012 cut may, on foot of the new deal, be receiving up to 57 per cent more in some cases.

Nursing representatives also argue that pay rises are required both to encourage new graduates to join the public health system and to incentivise those already in post to stay there.

The Irish Nurses and Midwives Organisation (INMO) has pointed to the failure of special Government drives to attract Irish nurses working abroad to return home.

INMO general secretary Phil Ní Sheaghdha told an Oireachtas committee in July that if low pay for nurses was not corrected, “we will be unable to recruit and retain the nurses required to care for our citizens inside and outside the hospital system. That is a simple matter of fact”.

Minister for Health Simon Harris, speaking at the INMO conference in May, said the Government recognised that there was a recruitment and retention challenge in nursing and health sector, although he cautioned that Ministers would await the outcome of the Pay Commission’s deliberations.

However, the narrative of increased pay being needed to tackle recruitment and retention problems has been challenged in recent weeks.

First, Fianna Fáil health spokesman Stephen Donnelly caused some controversy when he argued that nurses and doctors in Ireland were well paid.

Separately, the Department of Public Expenditure argued in a spending review this month that there had been no mass exodus of nurses from the Irish health system. It maintained that outflows of nurses and midwives from the Irish public health system were “modest in both an Irish labour market context, and compared internationally”. It also maintained international evidence suggested that nursing and midwifery remuneration in the Irish public health system was “high comparatively”.

The release by the HSE of details of hospitals being affected by up 350 vacant consultant posts will undoubtedly be seized on by the medical organisations to press the Government to address the two-tier pay system.

While the difficulties of smaller hospitals in attracting senior medical staff has been acknowledged for some time, the new HSE figures show that one of the country’s largest centres, Cork University Hospital has 33 vacant consultant posts.

The figures show that outside of the south/south west- which has 67 vacancies many of the other hospital groups across the country have about 40 vacant consultant positions.

The HSE report shows that there are, across the country, more than 40 vacant posts for consultants in general medicine.

There are about 30 vacant posts for consultant psychiatrists and 28 for ear, nose and throat surgeons.

The figures also suggest there are 18 consultant posts in emergency medicine vacant and 19 in anaesthesia.