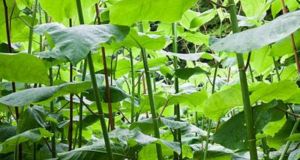 Japanese knotweed. “The plant poses less of a risk to buildings and other structures than many woody species, particularly trees.” Photograph: Getty Images

An Irish ecologist has completed research which suggests that the threat posed by Japanese knotweed is vastly overstated, and he claims it does no more damage to property that many indigenous plants and trees found growing in Ireland.

Based in the UK, Dr Mark Fennell is the principal ecologist at engineering firm AECOM, and has spent years working in the field of invasive plants.

Japanese knotweed is an invasive non-native species in Ireland, the UK, and elsewhere in Europe and North America, and recognised as one of the most problematic weeds. In the UK it is widely believed to pose a significant risk of damage to buildings within 7m of the above-ground portions of the plant due to its underground shoots, known as rhizomes.

When identified in homebuyers’ surveys, UK mortgage lenders often require evidence that a treatment programme is in place to control Japanese knotweed, entailing significant expense for sellers. The stigma associated with the plant means that property values can be affected even after action is taken to control it.

As part of their research, Dr Fennell’s team looked for evidence of the threat in existing research literature, surveyed invasive species control contractors and property surveyors, assessed residential properties where Japanese knotweed was found and examined data collected when knotweed was removed by excavation.

He told The Irish Times he was unconvinced Japanese knotweed caused the damage that has been reported, and said overblown reporting in the media has led to banks “imposing incredibly restrictive conditions on the sale or purchase of properties that are even close to Japanese knotweed”. He said it would be a “bad day if such a punitive policy ever comes to Ireland”.

He said his research team had “found nothing to suggest that Japanese knotweed causes significant damage to buildings – even when it is growing in close proximity – and certainly no more damage than other species that are not subject to such strict lending policies”.

Co-author Dr Karen Bacon, from the University of Leeds’ school of geography, said the negative impact of Japanese knotweed on such factors as biodiversity and flooding risks remained a cause for concern. “But this plant poses less of a risk to buildings and other structures than many woody species, particularly trees. Japanese knotweed is capable of damaging built structures, but where this occurs it is usually because an existing weakness or defect has been exacerbated.”

The survey of 51 contractors and 71 surveyors, reporting on 122 properties where Japanese knotweed was present, showed that reports of defects or structural damage to residential properties were rare.

A case study looked at 68 pre-1900 residential properties located on three streets in northern England, chosen because they had been abandoned for at least 10 years, were already in a state of disrepair, and so represented a “worst case” scenario in terms of susceptibility to damage from unchecked plant growth.

While knotweed was found within 7m of 18 of the properties, it was linked to less damage than the trees, climbers and shrubs. The researchers also found no support in the literature for the idea that Japanese knotweed is a major cause of damage to property and, overall, established it was less likely to cause damage than many other common species.

“If people see Japanese knotweed growing out of a crack they have these preconceptions that it has caused the problem but it could just as equally have been another plant. That is not to say that can’t cause damage because it can, but most plants can cause damage and the fact is it is simply not a bigger issue than many other plants.”

He expressed hope that his paper would start a discussion about Japanese knotweed amongst stakeholders.

“Hopefully in time it will bring about the change,” he said. “But it will take a lot for people to get on board and public perceptions will need to change, particularly in the UK. In the Republic we have an opportunity to stop the spread of the myth and the fear about Japanese knotweed.”