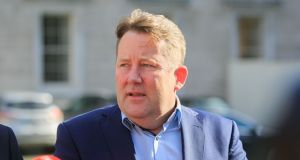 Local authority managers would be given more executive powers to dilute the ability of councillors to delay or block the sale of council land for housing under Fianna Fáil proposals being considered in the government talks.

Party sources said the amendment to existing rules to give more powers to council officials was among a number of measures being considered to increase the ability of councils and State agencies such as the Land Development Agency (LDA) to speed up the delivery of affordable and social homes.

There is deep frustration within Fianna Fáil regarding the Department of Housing, with one senior party figure claiming some efforts to speed up house building are being “strangled” by the Custom House.

Darragh O’Brien, the Fianna Fáil housing spokesman, has sought a meeting with the LDA, the agency tasked with co-ordinating State land for development, without department officials present due to the frustration with the department.

An earlier meeting in the process between Fianna Fáil, the LDA and department officials was deemed unsatisfactory. Fianna Fáil is also open to loosening the requirements for housing developments to have “social mix” in order to speed up construction.

Mr O’Brien said the party is focused on giving people the chance to “to buy and own their own home at an affordable rate and that is why we continue to push the affordable purchase scheme”.

He also said that mixed housing schemes – where private homes sit alongside social homes – “can sometimes be used as reason for people to object because they used the red herring of social mix”.

Currently, councillors can block the sale of lands by their local authority but Fianna Fáil sources instanced examples where this slowed the delivery of homes, such as at Shanganagh in Dún Laoghaire.

As well as its talks on forming a government with Fine Gael, Fianna Fáil will continue its negotiations with other parties, such as the Greens, who are also still in talks with Sinn Féin about a potential left-wing government.

Sinn Féin TD Pearse Doherty said it was time for other parties to make up their minds in the coming days about what form the next Government will take.

“I think it is now at a stage of make your mind up for the other political parties. There has been a lot of discussion in relation teasing out the ideas and common ground. This can’t go on forever,” he said.

“So we have agreed to meet with the Green Party further in the week. We have agreed that we want to crunch on three areas in particular which are climate, housing and health.

“We need to actually drill down into those issues. We have got a number of papers back from department officials that assists us in some of that work. What we have said is: listen, we need to move this into real discussions and finding out if they are up for that type of discussion.”

Mr Doherty said a meeting with the Green Party on Tuesday was constructive and frank.

“We have also made it clear to them that for them to support a Fine Gael, Fianna Fáil government in our view would be an absolute betrayal of that vote of change.”