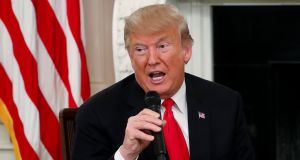 The House of Representatives passed a Bill on Monday to extend provisions for the E3 visa programme, which only applies to Australian citizens, to people from Ireland. Photograph: Kevin Lamarque

A renewed push is under way to secure US Senate approval for Irish inclusion in the E3 Visa Bill as early as this week, as the St Patrick’s Day celebrations get under way in Washington.

The House of Representatives passed a Bill on Monday to extend provisions for the visa programme, which currently only applies to Australian citizens, to people from Ireland.

The Bill, moved to the floor by senior Democratic congressman Richard Neal, proposes Irish citizens becoming eligible for the unused portion of Australia’s annual allocation of about 10,000 visas. However, it now must be approved unanimously by the Senate, which blocked the proposal in 2018.

The issue is likely to be raised by Taoiseach Leo Varadkar during his meeting with US president Donald Trump in the Oval Office on Thursday, which was still expected to go ahead despite the threat of coronavirus.

Special Envoy to the US John Deasy, who remains in his position until a new government is formed, and Senator Billy Lawless, who campaigns on Irish diaspora issues in the Seanad, have been involved in the negotiations with members of Congress and the Irish Embassy about the proposal.

Mr Deasy said the passing of the Bill in the House was welcome news, but that “we’ve a fight on our hands” to see it through the Senate.

Monday’s vote was an attempt to get the E3 visa issue back on the political agenda. The previous effort took place during the last Congress, so the process had to be effectively restarted. It is understood that Australia raised some concerns in the run-up to the vote, but ultimately it passed easily in the House.

The path is much more difficult in the Senate where Tom Cotton, a senator from Arkansas, blocked its passage 16 months ago.

The E3 is a two-year renewable visa that allows Australian citizens and their spouses to live and work in the US. Australia negotiated the programme in 2005 as part of a trade agreement with the US, and it was widely seen as a reward for Australia supporting the US in the Iraq war.

Applicants must have a job in the US to qualify and possess certain academic or other credentials. But the E3 is significantly easier and cheaper to obtain than the traditional H1B visa. Australians do not currently use the full allocation, which prompted calls for the remainder to be made available to Irish citizens.

Speaking on the floor before the vote, Mr Neal noted that immigration from Ireland to America had been “extremely limited” in recent years. He also highlighted the fact that Ireland would offer reciprocal arrangements to Americans once the Bill was enacted.

“The E3 visas, combined with these reciprocal arrangements, would provide a welcome and long overdue movement of citizens between Ireland and the United States in both directions, which is so important to Irish America, the United States and, indeed, Ireland.”

Ireland’s Ambassador to the US, Dan Mulhall, thanked Mr Neal for his support for the proposal.

The Ad-Hoc Committee to protect the Belfast Agreement – an informal group of Irish-Americans established last year – is also expected to raise the Emma DeSouza case this week with British officials. Ms De Souza – a Northern Ireland citizen who lost her case claiming her right to identify as Irish – is due in Washington this week.

“We remain deeply concerned and perplexed about the refusal of the UK home office to allow Emma DeSouza to identify as Irish under the terms of the Good Friday [Belfast] Agreement,” said former congressman Bruce Morrison.