Fianna Fáil and SDLP in negotiations over merger 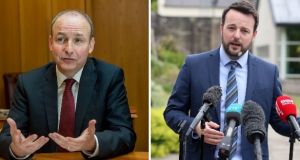 Fianna Fáil is to take over the SDLP and contest elections in Northern Ireland as part of merger being discussed at the highest levels of the parties.

The mooted move would see the two initially stand on a joint platform for next spring’s local and European elections, as part of a phased process which would eventually bring both under the Fianna Fáil banner.

The merger would also involve other figures from the constitutional nationalist tradition in an attempt to ensure there is no friction between the Fianna Fáil and SDLP camps. These figures are described as prominent individuals from the North and the aim is to ensure the merger is wider than just a coming together of parties.

Talks are ongoing between Fianna Fáil leader Micheál Martin, SDLP leader Colum Eastwood and senior officials. The parties have talked about co-operating in the past, but the latest talks are characterised as the most serious yet.

Mr Martin recently told his ardchomhairle, Fianna Fáil’s ruling executive, to expect developments on the party organising in the North next month, and that it was talking to “groups” across the Border. While he did not specifically mention the SDLP, the merger is on the cards.

However, it is understood that the September timeline is seen as too optimistic, since talks are yet to conclude. One source said an announcement later in the autumn was now more likely. Others cautioned that the talks were still in a state of “flux” and success could not be guaranteed.

Completing the merger over a number of stages, beginning with a joint platform at the local and European elections next spring, would help bring supporters of both parties along with such a move, it is claimed.