Long-time Republican Party spin doctor Sean Spicer tells a Dublin audience he expects Donald Trump to be re-elected in 2020. The former US press secretary is in Ireland to promote his memoir about his short stint in the White House. 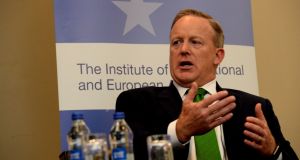 People need to think about another six years of Donald Trump as US president, his former press secretary Sean Spicer has told an audience in Dublin.

The long-time Republican Party spin doctor, who was in Ireland to promote his memoir about his short stint in the White House, said he expects Mr Trump to be re-elected in 2020.

In a public interview hosted by the Institute of International and European Affairs, Mr Spicer said he was “concerned” Democrats would win back the House of Representatives in November’s congressional elections.

But this, he said, could be “a good political outcome” for the former reality TV star in his re-election bid as it would block Mr Trump’s legislative plans and he could blame Democrats.

“It probably strengthens him for re-election because you can say: ‘Here’s how the agenda stalled’. It is bad for the country but it is good potentially for his re-election.”

Mr Spicer quit as press secretary in July 2017 after five months in the role, a tumultuous period for the Republican Party dominated by his untruths, dubious remarks and fraught exchanges with the US media.

The US seemed more ideologically and politically divided, he said, and this was “bad place for our country” but offered no view on whether Mr Trump was contributing to this polarisation.

“People have chosen sides,” he said.

Strong economic growth and low unemployment might be “the saving grace” for Republicans in the upcoming elections, but Mr Spicer said he expected Mr Trump’s biggest legacy to be the appointment of young, conservative judges across US courts.

Asked about passages from his book, The Briefing, where he described Mr Trump’s tweets causing him trouble in the White House, he said: “There is no one that has the ability to message as he does”.

He accepted there was “meddling” by Russia in the 2016 election but it was aimed at undermining public trust and faith in US institutions, not in helping Mr Trump’s campaign.

He rejected the view that Mr Trump had ill feeling towards the EU, saying the US president would not build properties in the UK and Ireland if he had.

“He clearly has some kind of affinity for Europe and Ireland,” he said.

Challenged by one audience member on his view that there was no kick-back from Republican voters on Mr Trump’s “kowtowing to Putin” and “ignorant, crass, shock-jock tactics,” Mr Spicer said this was not his opinion but that polls were showing strong support for him among Republicans.

He sidestepped other questions on current Trump administration policy, saying they were “way outside his wheelhouse”.

Speaking to reporters afterwards, Mr Spicer was asked how the president’s anti-immigrant policies sat with him as the great-grandson of an Irish immigrant.

Mr Spicer refused to be drawn on whether he might be interested in the vacancy of US ambassador in Dublin, a role he has been linked with. “Right now, I am enjoying a book tour and there is nothing on the table,” he said.

In Ireland, opening doors can be very hard