Children with scoliosis ‘will have to go abroad’ for operations 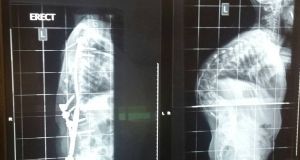 X-rays of the spine of a child with scoliosis after and before surgery.

Children will have to go abroad for operations as part of a solution to long waiting lists for scoliosis surgeries, according to Minister for Health Simon Harris.

The Health Service Executive is set to miss a target set by the Government that no child will have to wait for more than four months for scoliosis surgery by the end of the year.

The Scoliosis Advocacy Network says the only way the target can be reached is if the operating theatre at Our Lady’s Hospital in Crumlin opens for five days a week, instead of three as at present.

Mr Harris said the aim was to put in place a sustainable situation where every child gets surgery within four months. However, first there is a backlog that has to be deal with.

When the four-month target was announced, it was clear outsourcing would be part of the solution, he told the Oireachtas health committee.

Mr Harris said he knew going abroad would not suit every family but he made no apologies for offering an “additional route” to parents.

“We are trying to go at this every way we possibly can.”

An additional €10 million to fund scoliosis services has been provided, with additional consultants and nurses appointed.

Two additional surgeons would have to be recruited in order for Crumlin to operate five days a week, he added.

The Scoliosis Advocacy Network says parents are being subjected to “emotional blackmail” where they do not wish to travel abroad for treatment for their child.

Scoliosis involves a curve of the spine which restricts movement and can interfere with breathing if it goes uncorrected.