Varadkar has ‘more views on abortion than coloured socks’

Taoiseach Leo Varadkar outlines dates for forthcoming referendums. including one on the Eighth Amendment, during Leader's Questions on 26th September. Video: Oireachtas TV 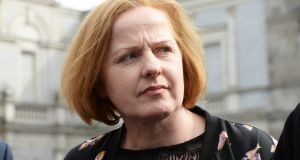 TD Ruth Coppinger told the Dáil on Wednesday that when Leo Varadkar was minister for health, 12 people were leaving the country daily for abortions. File photograph: Cyril Byrne/The Irish Times

The Taoiseach has been accused by Solidarity TD Ruth Coppinger of having “more positions in abortion than coloured socks’’.

However, unlike Leo Varadkar’s sock colour, abortion was not a public relations issue, she added.

The Taoiseach has said he will wait until the wording of the abortion referendum is set before he will personally campaign in favour of the measure.

The referendum is scheduled for May or June of next year.

Ms Coppinger told the Dáil on Wednesday that when Mr Varadkar was minister for health, 12 people were leaving the country daily for abortions. However, he had not seen the need for a referendum at that time.

The Taoiseach, she added, had said his views were evolving and people were allowed that.

“But I do think they might expect a minister, a doctor, somebody in politics for a long time, a taoiseach, to have a more developed view on something that is a key issue,’’ Ms Coppinger said.

Mr Varadkar said he was not the kind of person who was going to give a yes or no answer to a question he had not yet seen.

“Perhaps Deputy Coppinger has committed to vote yes to a referendum, the wording of which she has not seen yet,’’ he added.

They would all need to see the question before deciding on voting yes or no to it, said Mr Varadkar.

Ms Coppinger said tens of thousands of people would take to the streets of Dublin on Saturday in what might well be the largest pro-choice march seen in this country.

“After all the campaigning and marching, and after years of being told there was no appetite for it, at last we got this important and basic first step from the current Government,’’ she added.

“However, the question most vital to the thousands marching for this social change is what kind of referendum it will be.’’

Mr Varadkar said he would like to see the Oireachtas committee dealing with the issue develop a consenus, to the extent that it was possible, around a wording that could be put to the people .

Ms Coppinger said she had heard some people on the committee say it was not their job to deal with this or that but to find something that would be passed.

“For the people campaigning and yearning for social change, it is very important they can let the members of the committee know that they must get with where public opinion is at and catch up with it,’’ she added.

Mr Varadkar said a timeline was required for any referendum. Legislation had to be passed by the Oireachtas, a referendum commission established and time set aside for a campaign.

He accepted, he said, it would be better to have the referendum in May because turnout would be higher.